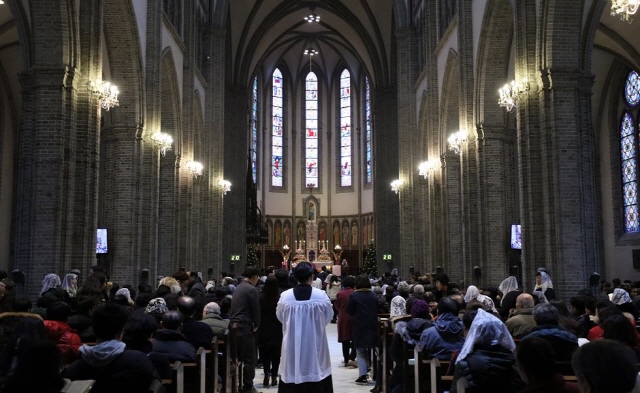 SEOUL, Jan. 11 (Korea Bizwire) — The number of Catholics in South Korea has steadily increased over the past two decades, though its growth significantly slowed in recent years, a report showed Saturday.

By diocese, Suwon, just south of Seoul, logged the highest increase rate of 89.1 percent in the 20-year period, followed by Daejeon in central South Korea with 79.6 percent and Uijeongbu, north of the capital, with 78.9 percent, it noted.

However, the year-to-year growth rate in Catholics has gradually slowed to below 1 percent. In 2000 and 2001, the Catholic population grew 3.2 percent and 3.9 percent, respectively, before falling to the 2 percent range until 2009.

The growth rate dropped to 1.7 percent in 2010 and briefly rebounded to 2.2 percent in 2014 due to Pope Francis’ visit to South Korea. But it again dived below 1 percent to reach 0.9 percent two years ago.

But their mass attendance rate, considered a key indicator of existing believers’ religious life, tumbled by more than 10 percentage points from 29.5 percent to 18.3 percent during the period.

“The steep fall in the Sunday mass attendance rate is noteworthy. All dioceses have made various efforts to bring back tepid Christians and overhaul the church, but any significant change has yet to come. The same problem has repeated annually,” the report said.

“It’s time to reflect on our current missionary work and reconsider the direction of domestic evangelism,” it said.

It said rapid aging of the Catholic population is another notable change.

Between 2003 and 2018, Catholics younger than nine years old and in their teens contracted by 32.4 percent and 33.2 percent, respectively.