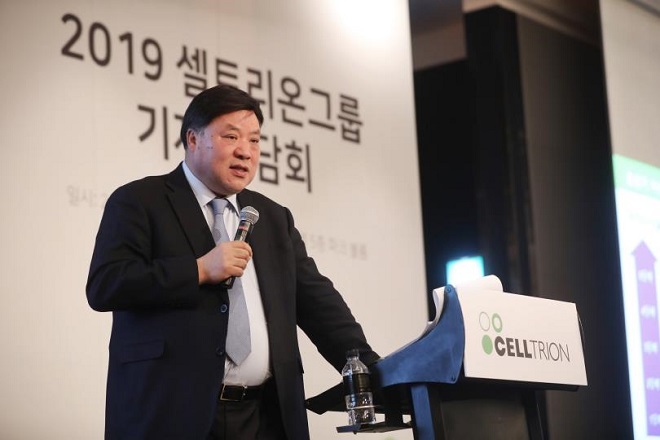 SEOUL, July 9 (Korea Bizwire) — The chief of the pharmaceutical group Celltrion saw the value of his stock holdings rise the most among the heads of South Korea’s major business groups in the first half, data showed Thursday.

Seo Jung-jin held 5.85 trillion won (US$4.9 billion) worth of listed shares in group flagship Celltrion Inc. and other affiliates as of end-June, up 116.4 percent from the start of the year, according to the data from market researcher CXO Institute.

Hanjin Group Chairman Cho Won-tae was the second-largest gainer with its stock assets rising nearly 101 percent to 309.4 billion won over the cited period.

Lee Kun-hee, the bedridden former chief of South Korea’s top conglomerate Samsung Group, remained the richest shareholder in the first half, though his stock value fell more than 10 percent to 17.38 trillion won due to a plunge in the share price of Samsung Life Insurance Co.

Lee has been hospitalized since he suffered a heart attack in 2014.

The second-largest shareholder in South Korea was Lee’s only son and de facto Samsung chief, Jae-yong, who held 7.26 trillion won worth of shares, down 0.2 percent.

The data covered 39 heads and former or de facto chiefs of the business groups who owned shares in listed units.

Of the total, 13 saw the value of their stock assets rise over the cited period with the remaining 26 suffering declines.

The value of shares held by the 39 business tycoons totaled 56.51 trillion won as of end-June, down 1.9 percent from the beginning of the year, according to the data.