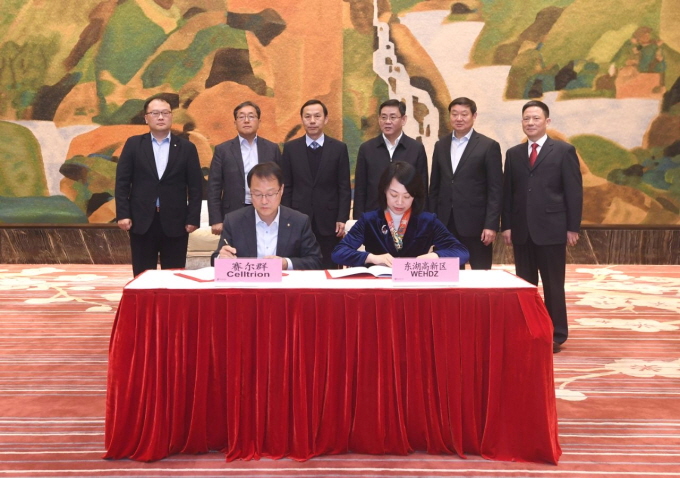 This photo, provided by Celltrion Inc. on Jan. 21, 2020, shows CEO Gi Woo-seong (L at table) with an official from the Donghu New Technology Development Zone signing an agreement.

The planned plant, with a production capacity of 120,000 liters of biopharmaceutical products, will be located in the central city of Wuhan, Celltrion said.

It will be the largest production facility in the world’s second-largest biopharmaceutical market.

Celltrion said it signed a business agreement with the city government of Wuhan and the provincial government of Hubei Province earlier in the day.

Under the agreement, the plant will not only develop and manufacture biopharmaceutical products but also include a contract manufacturing organization (CMO) business.

“There is huge demand for high quality medicine and medical supplies in China,” Celltrion CEO Gi Woo-seong said in a press release.

“Efforts will be made so that we can provide biosimilar products to Chinese patients as fast as possible.”

In order to do so, Celltrion said it will soon set up a corporate body in mainland China and hold a groundbreaking ceremony within the first half of the year.

The business plan deviates from its earlier plan to set up a joint venture (JV), the Vcell Healthcare Ltd., with Hong Kong-based Nan Fung Group in China.