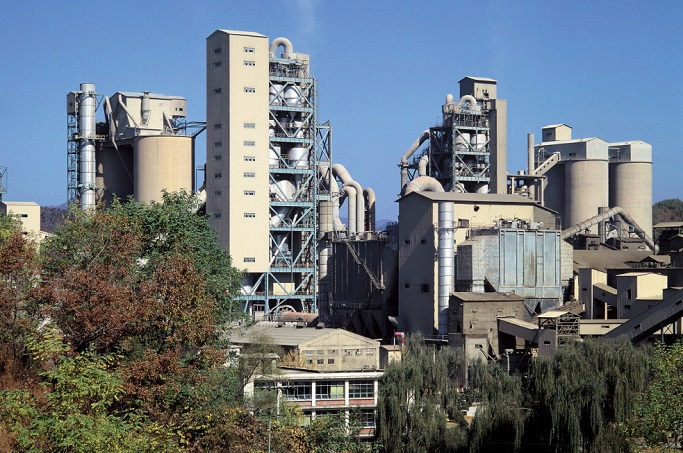 This photo provided by Ssangyong C&E Co. shows the company’s cement factory in the eastern port city of Donghae.

Sampyo Group, the parent of Sampyo Cement Co., announced on Monday that it will invest a total of 200 billion won (US$171 million) to reduce the amount of carbon generated during the process of cement making and transport by 35 percent by 2030 and 100 percent by 2050.

Ssangyong C&E Co. reduced its annual use of bituminous coals from 1.5 million tons to 1 million tons last year. It aims to achieve a ‘zero goal’ by 2030.

Hanil Cement Co. and Hanil Hyundai Cement Co. plan to make an investment of up to 270 billion won to establish circulatory resource recycling facilities by 2025.

The cement industry’s latest move is a part of efforts to actively cope with the environmental, social and governance (ESG) management trend, as well as to improve its image from one as a main source of carbon emissions.

Included in the ‘2050 carbon neutral scenario’ that the government announced early this month is the objective of reducing the cement industry’s greenhouse gas emissions by 55 percent from 35.8 million tons in 2018 to 16.1 million tons in 2050.

Local cement companies’ annual use of circulatory resources such as waste plastics jumped by 37.6 percent to 1.72 million tons last year from 1.25 million tons in 2016, according to the Korea Cement Association.