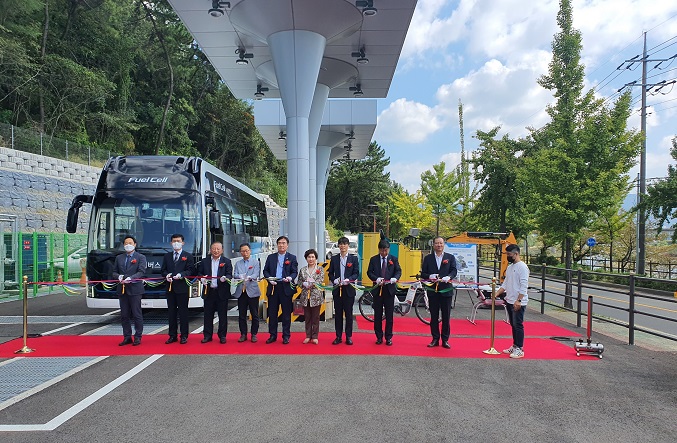 Officials pose for a photo during a ceremony to dedicate a hydrogen charging station in Changwon on Oct. 7, 2022 in this photo provided by the South Gyeongsang provincial office.

CHANGWON, Oct. 10 (Korea Bizwire) — An integrated hydrogen charging station, where all forms of hydrogen mobility platforms can charge, has been built for the first time in South Korea.

South Gyeongsang provincial office and the city of Changwon announced that the Daewon Hydrogen Charging Station was built in the in the southeastern city.

The other 13 charging stations in the province are available only for passenger vehicles and buses.

In contrast, Daewon Hydrogen Charging Station can charge hydrogen-powered commercial vehicles, trams, construction equipment, drones and other forms of hydrogen mobility platforms, based on a temporary regulatory exemption provided by the Ministry of Trade, Industry and Energy.

The station is capable of charging more than 200 passenger vehicles and more than 30 buses within the 16 hours that it is open every day. The station will set the price of hydrogen at 8,000 won (US$5.60) per kilogram.

The provincial office plans to add two more recharging stations by the end of this year and set up one or more stations for each city or county by 2025. For a major city, it plans to set up stations no more than a 20-minute drive apart.

There are currently a total of 2,159 hydrogen-powered vehicles in the province, including 2,127 hydrogen passenger vehicles and 32 buses.