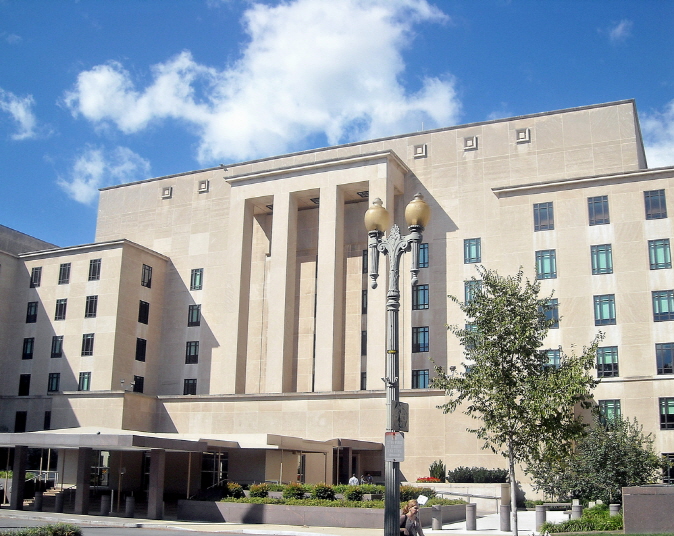 SEOUL, Feb. 27 (Korea Bizwire) – A dozen additional countries and parts of China have enacted entry restrictions on travelers from South Korea over coronavirus concerns, according to the foreign ministry Thursday, bringing the total number of such countries to 43.

The State Department’s travel advisory was raised by one notch to Level 3, the second-highest on a four-tier scale. Level 4 advises people not to travel to the designated country.

The U.S. has not put any entry restrictions from travelers from South Korea, however.

U.S. President Donald Trump said it is not the right time to restrict travel to and from the country.

Five provinces in China have tightened quarantine processes for international air travelers, with some restrictions applying to all passengers and some only to those coming from South Korea or Japan, according to the website of Seoul’s foreign ministry Thursday.

In addition, a local airline said that the city of Tianjin said it plans to quarantine all arrivals from South Korea and Japan for two weeks starting Friday as a precautionary move.

Mongolia, Fiji, the Philippines and the Seychelles imposed entry bans on South Korean nationals and visitors who have been in the Asian country for the past two weeks.

The Maldives and El Salvador joined the four countries with the entry ban, while Nauru was taken off the list as its government confirmed that South Korea was not among the countries subject to the measure, the website showed. 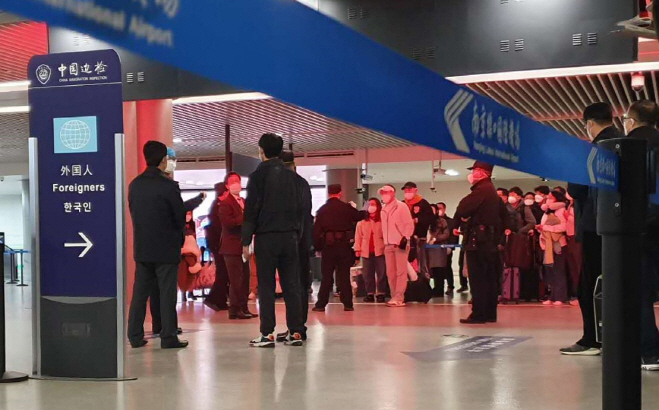 This photo, provided by a citizen, shows South Koreans waiting to go through quarantine by Chinese health authorities at Nanjin International Airport in China on Feb. 25, 2020.

South Korea has seen a rapid rise in the number of coronavirus cases in recent weeks.

On Thursday, the Korea Centers for Disease Control and Prevention (KCDC) reported an additional 505 new cases, bringing the total to 1,766 cases and 13 deaths.

“We know that our people are very much worried. We’ve protested strongly to some governments that took the measures without prior notice, and our diplomatic missions are actively negotiating with other countries so as to not cause any situation that may baffle our citizens,” Kang told reporters at Incheon International Airport upon returning from a trip to Europe.

“Even though the confirmed infection cases are on the rise, the assessment by the international community and the (World Health Organization) is that they trust our capabilities,” she added.

The Chinese measures have raised the ire of South Koreans as they came despite Seoul’s rejection of public calls for an across-the-board entry ban on Chinese tourists in line with Beijing’s demand for “scientific” decisions on travel restrictions.

Chinese Ambassador to Seoul Xing Haiming said Wednesday the quarantine measures by the provincial authorities are not intended only for South Koreans and that the two sides are working closely together to bring the virus under control.

The foreign ministry has also come under fire for holding back on including China in a list of countries toughening entry restrictions against South Koreans, with critics accusing the ministry of being too mindful of China. Ministry officials said it took time to verify the restrictions.

Related to the entry restrictions being enforced and impact on the movement of people, the country’s transportation ministry said it will set up a special air traffic taskforce that will closely monitor international flight developments and formulate a response so as to reduce any effect on travelers and the industry as a whole.

“The COVID-19 scare has impacted air passenger traffic across the globe and not just in Northeast Asia, with such changes requiring close attention,” the ministry said.

Official data showed that in the first three weeks of February, the number of people using South Korean airports to go abroad stood at 3.1 million, down 43.7 percent compared with the year before.

It said the total is less than half of the 7.6 million travelers tallied in December of 2019, before the first coronavirus outbreak was reported by China.