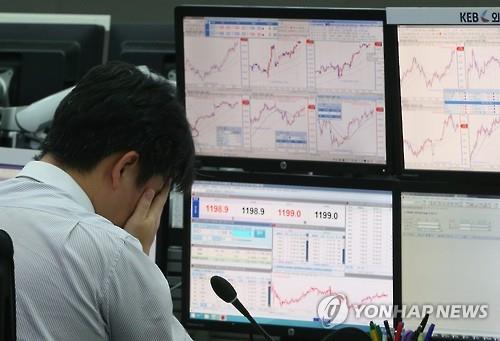 The South Korean economy has lost vigor as tech and heavy-manufacturing industries, the key growth engine, have grappled with weak demand at home and abroad. Making matters worse, it now faces the stronger headwind of China’s slowing growth. (image: Yonhap)

SEOUL, Aug. 24 (Korea Bizwire) — Fears of a slowdown in the Chinese economy sent shockwaves across global financial markets on Monday, leaving South Korean exporters jittery over their future performance as they rely heavily on the world’s second-largest economy, experts said.

China’s Shanghai Composite Index tumbled 8.49 percent on Monday as investors dumped shares across the board following a sell-off on Wall Street on Friday.

The worst stock plunge since 2007, despite Beijing’s aggressive support measures including its currency devaluation on Aug. 11, deepened concerns over the South Korean economy at a time when the U.S Federal Reserve is on track to raise interest rates later this year, which could accelerate an capital outflow from the equity market.

The South Korean economy has lost vigor as tech and heavy-manufacturing industries, the key growth engine, have grappled with weak demand at home and abroad. Making matters worse, it now faces the stronger headwind of China’s slowing growth.

“As South Korea is heavily reliant on the Chinese economy, China’s stock market slump could have an immediate ripple effect in the real economy as well,” Lee Jun-yeop, a senior researcher at Hyundai Economic Research Institute, said. “If Chinese companies suffer, it could hurt South Korean parts suppliers, which could have a negative impact on the overall exports.”

South Korea is one of the leading suppliers of intermediate goods to Chinese companies who buy parts, components and materials from abroad and assemble them for exports, but its outbound shipments sharply fell in the first half mainly due to a drop in demand from China.

Na expected the Bank of Korea to further lower interest rates by the year-end to support growth, following two rate cuts earlier this year to a record low at 1.5 percent.

Shipbuilders and steelmakers, which are suffering due to the prolonged global recession, are expected to face fiercer competition with Chinese companies following the yuan devaluations amid a global supply glut.

“If the Chinese steelmakers cut prices while supplies are already abundant, it will deal a heavy blow to Korean companies,” an official from top steelmaker POSCO said.

Automakers are worried that the worsening consumer sentiment could further dampen demand for new cars in China, the world’s biggest and fastest growing auto market.

“It is highly likely that sales in China will shrink,” said an official at Hyundai Motor, the nation’s No. 1 automaker. “It is worrisome that the slumping Chinese car sales could also weigh down the overall global sales.”

Tech companies already facing declining market share in China may find themselves in a fragile footing as emerging Chinese companies have posed a greater threat to Korean companies.

Shares of Samsung Electronics, the world’s largest handset maker, broke fresh yearly lows over the past week on the bleak outlook on its mainstay phone business after posting sluggish earnings in the first half of this year.

In contrast, China’s Huawei Technologies has risen to the world’s No. 3 phone maker after Samsung and Apple by aggressively raising its market share in emerging economies.

Some expected Beijing to take additional easing measures to help allay fears in the financial market, but doubts remain whether such actions can achieve their proposed goals.

“Even if China takes stimulus measures to calm down the financial market for now, its troubled economy is bad for South Korean exporters,” said Kim Hak-gyun, a strategist at KDB Daewoo Securities. “Korean exporters are expected to suffer from weak demands for a while, which could take time to recover.”