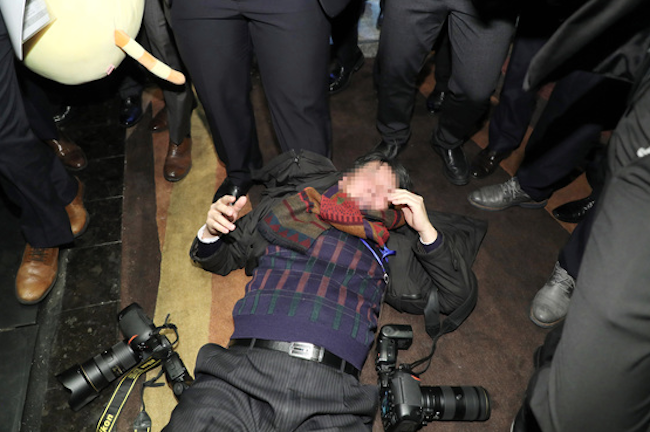 “An official of the Chinese foreign ministry’s bureau handling the Asian region contacted us last night and explained the measures that have been and will be taken in response to the incident,” he told reporters on condition of anonymity.

“He said that (his ministry) has asked for relevant government agencies to immediately launch an investigation into this case … (and) will take necessary measures, though it will take time to figure out what exactly happened,” he added.

According to the source at the South Korean foreign ministry, the Chinese official still hoped that what he called an “accidental unfortunate event” would not negatively affect the ongoing state visit by the South Korean leader.

On Thursday, Chinese security guards beat and injured two South Korean photojournalists who were covering a business function attended by President Moon Jae-in hours before his summit with Xi Jinping.

One of them took a severe beating while being completely surrounded by the guards despite strong protests from his colleagues and South Korean officials, including those from the presidential office Cheong Wa Dae. He was taken to a hospital for treatment.

South Korea immediately protested over the incident. China has not expressed regret or made any official apology. Foreign ministry spokesman Lu Kang said that Beijing is paying “close attention” to the case.

The Seoul official said that relevant evidence, including video clips that captured the violence, has been submitted to Chinese police, who he believed have launched an investigation.

The two injured journalists will return to South Korea later in the day and be taken to a local hospital for further treatment, he said.