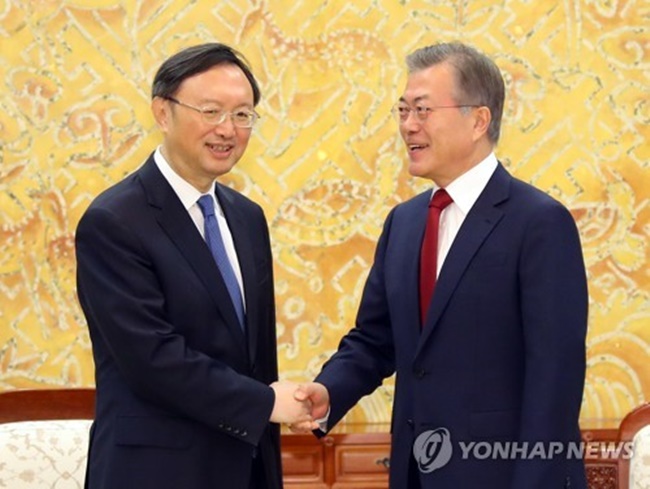 SEOUL, April 1 (Korea Bizwire) – China will end what are believed to be retaliatory measures over South Korea’s deployment of a U.S.-developed missile shield in the near future, a top Chinese official said Friday.

“China places great importance on matters of interest to President Moon,” Yang was quoted as saying by Cheong Wa Dae spokesman Kim Eui-kyeom, referring to the normalization of Chinese group tourism to South Korea, smooth sales of Lotte Mart’s Chinese stores, the resumption of the construction of a Lotte Town in Shenyang and subsidies for electric cars with Korean batteries. He added that there will be “tangible results in the near future” on these matters.

Yang stressed that he hopes President Moon will believe him about this.

The Chinese official arrived here on Thursday to relay the outcome of Xi’s meeting with North Korean leader Kim Jong-un on Monday. Yang met Moon’s top security advisor Chung Eui-yong on the day of his arrival.

“When Chung met Yang, he asked for answers on three issues — group tourism, Lotte and electric car batteries — describing them as Moon’s main issues of concern, and Yang brought answers with him,” a key presidential official told reporters on condition of anonymity.

On Friday, Yang briefed Moon in detail on the outcome of the North Korea-China summit and the two discussed ways to lead the North’s upcoming summits with South Korea and the United States toward success, according to the spokesman.

During his meeting with Xi, Kim reportedly said his country could denuclearize if Seoul and Washington take measures to reduce tension on the Korean Peninsula.

“There is a domestic factor in South Korea’s fine dust, but China is also a factor. So there are mounting calls among our people for close cooperation between the two countries to tackle the problem,” Moon was quoted as saying.

South Korea has been grappling with ever-worsening air quality caused by particulate matter both emitted at home and blowing in from China.

Yang, in response, proposed to launch a joint environmental research and cooperation center as early as possible.