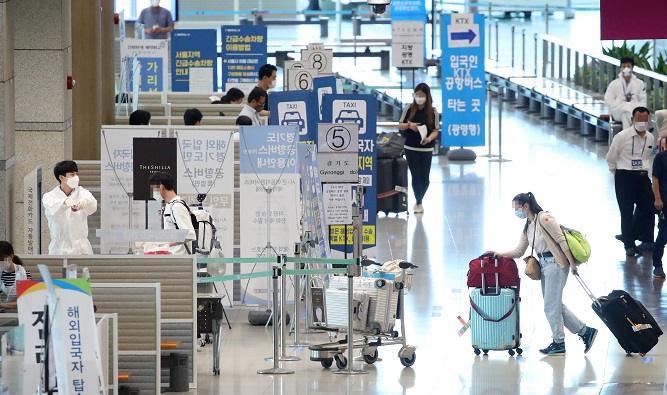 People arriving from abroad are guided to undergo a quarantine procedure in the arrival hall at Incheon airport, west of Seoul, on Aug. 11, 2020. (Yonhap)

SEOUL, Oct. 21 (Korea Bizwire) — Among foreigners who received South Korean health insurance benefits over the past five years, Chinese people accounted for more than two thirds of the total.

For cases of illegal health insurance coverage that happened during the same period, the clawback amount remained low at less than 50 percent.

According to the data that Rep. Kang Ki-yoon of the main opposition People Power Party received from the National Health Insurance Service, the value of health insurance benefits received by foreigners in the top 20 countries during the period from 2015 to June 2020 totaled 3.4 trillion won (US$3.02 billion).

The clawback amount, however, remained low at 51.7 percent or 16.1 billion won.

“There have been some cases where foreigners who enter this country for diagnostic purpose or medical shopping were paid health insurance benefits simply after making a short stay here,” Kang said.