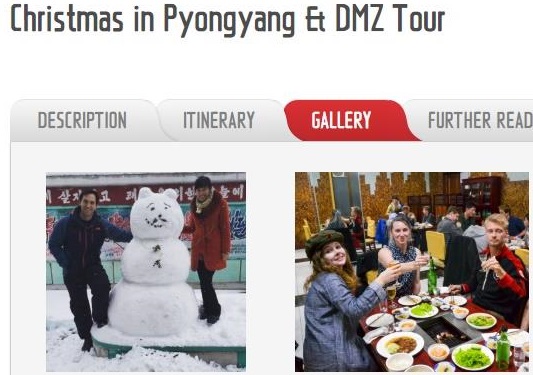 This image was captured from the website of Young Pioneer Tours, which promotes tour programs to North Korea. (Yonhap)

According to the website of Young Pioneer Tours, a three-day tour to Pyongyang sells for 475 pounds (US$608) and a four-day program, which also includes tours to the border city of Kaesong and the Demilitarized Zone bordering South Korea, sells for 595 pounds ($762).

The agency specializes in North Korea tourism. Late American student Otto Warmbier used one of its programs to visit the North in 2016, though he was detained during the trip for taking down a political propaganda sign from a hotel and spent 17 months there before returning home in a coma and dying days later.

The Christmas trip begins on Dec. 24, taking tourists from the Chinese city of Dandong near the border with the North to Pyongyang by train. The program includes sightseeing of major points of attraction in Pyongyang, such as Kim Il Sung Square and Mansudae Grand Monument, on Christmas Day.

The four-day program also includes a trip to the inter-Korean border city of Kaesong and DMZ the following day.