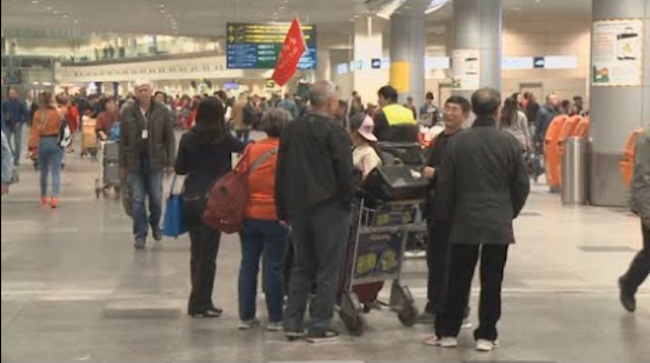 The decline in Chinese tourism to South Korea may have reached an inflection point last month, as Chinese arrivals rebounded after a year of geopolitical tension strained ties between Seoul and Beijing. (Image: Yonhap)

SEJONG, April 13 (Korea Bizwire) — The decline in Chinese tourism to South Korea may have reached an inflection point last month, as Chinese arrivals rebounded after a year of strained ties between Seoul and Beijing.

According to a government document revealed by the Ministry of Strategy and Finance, last month’s inbound Chinese tourists marked a 13.3 percent improvement over the same month the previous year, when the Chinese authorities’ ban on travel South Korea resulted in a drop of 40 percent in tourists.

Though official statistics have yet to be published, indications are that last month’s tourist numbers surpassed 400,000 after hovering around the 300,000 line in previous months. In the past year, the number of Chinese tourists was 30 to 60 percent lower than during the year prior.

Last month’s growth in Chinese tourist arrivals is thought to have also been influenced by the base effect. Arrival numbers are still below where they were in previous years, but the figures have some taking the optimistic view that Chinese tourism will begin to gain momentum.

An official with the Ministry of Strategy and Finance said, “Whether [the Chinese tourist numbers] will begin to decisively increase remains to be seen. So far, the situation as a whole appears to be heading in the right direction.”

At the meeting, South Korean representatives are to discuss invigorating Chinese tourism with their counterparts. (Image: Yonhap)

Near the end of the month, the South Korean and Chinese governments are expected to hold their annual joint economic committee session for the first time in two years. At the meeting, South Korean representatives are likely to discuss invigorating Chinese tourism with their counterparts.