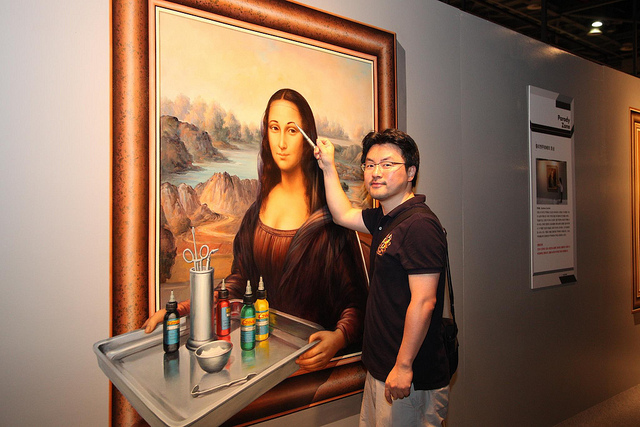 In the trick art museums, viewers can experience the most fantastic feeling to be with artworks in the museum by taking photos in it. (image: Jinho Jung/flickr)

SEOUL, Korea, Mar 12 (Korea Bizwire) – Do you want to skydive without flying up on an airplane or draw eyebrows on da Vinci’s Mona Lisa with curiosity? Visit a nearby trick art museum.

Now, trick art museums in Seoul’s Insa-dong attract numerous tourists, mostly Chinese, and are even expected to boost the business of the top tourist attraction which saw a downturn recently.

According to Creative Tong, operator of the trick art museum chain “Alive Museum,” during the last weekend of March 8-9, it admitted some 3,000 visitors. Although there are no specific stats, Creative Tong argues that considerable numbers of the viewers were Chinese tourists.

The operator opened two trick art museums in Insa-dong in August 2013 and January this year respectively. The latter is larger in scale and bigger in exhibition space.

In the museums, viewers can experience the most fantastic feeling to be with artworks in the museum by taking photos in it. One can be long-legged one, swim with the fish, fly with birds and even become a prey to a dinosaur with tricks of the artwork and the angle of photo shot. The museum recommends viewers to come with pairs so that one can takes shots while the other is posing on the trick paintings.

The Alive Museum chain began with a trick art museum established in Jeju in June 2009. Now, it has five such museums including another one in Jeju in the south and is establishing similar ones in China, Thailand, Vietnam, and Turkey.

An official at Creative Tong said, “Our museum is focusing on cooperative relationship with neighboring business districts for the development of Insa-dong by informing various places to the viewers. We hope our museum add another vitality to the area.”