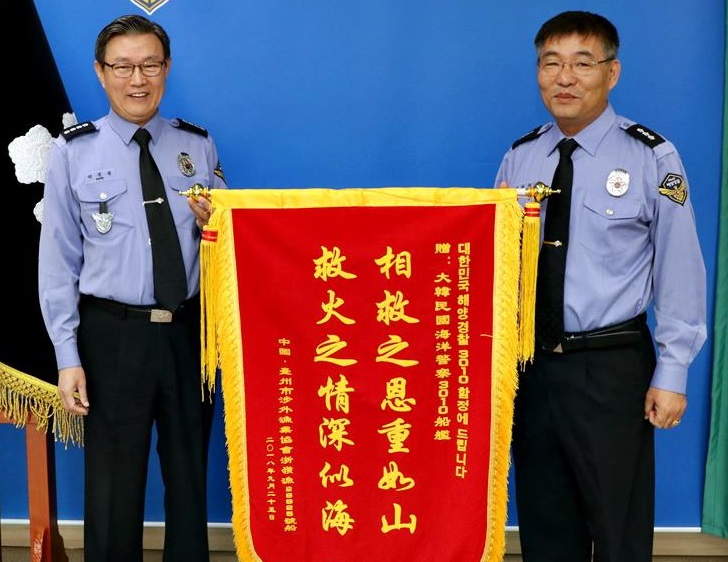 Taizhou Fishing Association of Zhejiang Province, China delivered a letter and a flag embroidered in golden words to the Gunsan Coast Guard, thanking them for saving the lives of the Chinese sailors. (image: Gunsan Coast Guard)

SEOUL, Oct. 12 (Korea Bizwire) — Following the Yellow Sea rescue of nine Chinese sailors last month by the Korean Coast Guard after a fire broke out, a Chinese fishing association sent a letter of thanks and a flag to express gratitude for the rescue.

The one-page letter described the scene of the accident, which included how the siren of the Coast Guard “brought new hope.” The letter also thanked the Coast Guard officials for “helping them have a second chance at life.”

The Gunsan Coast Guard said that the Chinese practice of gifting gold-embroidered flags to the police, hospitals, and government agencies was a way to express thanks for their services.

But sending one such flag to a foreign government entity “was very rare,” said the Coast Guard official.

The official said that the Chinese fishing association was very grateful for saving the lives of their fellow Chinese sailors despite the fact that illegal fishing practices of Chinese fishing boats have been troubling the Korean Coast Guard for many years.

The Chinese ship in question weighing 159 tons caught on fire on September 19 at around 2:45 a.m., 137 kilometers southwest of Gunsan’s Eocheong-do.

The Gunsan Coast Guard arrived on site with a 3,000-ton patrol ship within 10 minutes of receiving the rescue signal.

All nine sailors – including the captain – on board were rescued within two minutes before being transferred onto the patrol ship. The Chinese ship was completely engulfed in flames and eventually sank.