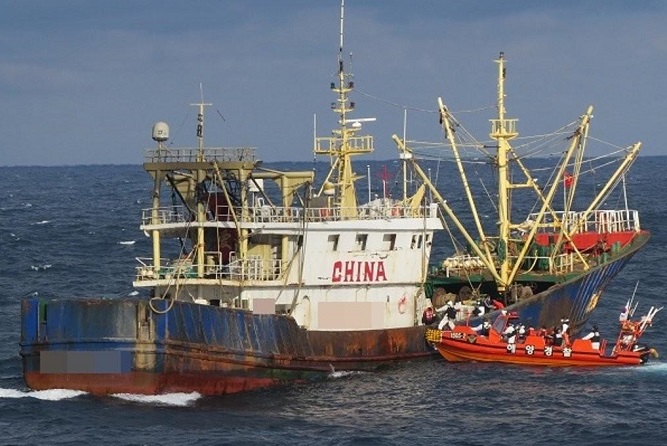 This photo, released Oct. 24, 2021, by South Korea’s Coast Guard, shows a Chinese boat seized by Coast Guard officials for fishing without a permit in the country’s exclusive economic zone a day earlier.

JEJU, Nov. 25 (Korea Bizwire) — Concerns are growing that illegal fishing by Chinese vessels is decimating fisheries resources in the waters off Jeju Island.

The Korean Coast Guard recently intercepted a Chinese flagged fishing boat (149 ton, 18 crew members) that was illegally using a net with 7-millimeter mesh, far tighter than the legal mesh size of 50-millimeter, while fishing off the coast of Jeju Island four times during the period from Nov. 10 to 13.

By using the tighter mesh size, the Chinese fishing boat caught a total of 7,500 kilograms of fish, including yellow corvine, during the four days. Nonetheless, it recorded in its fishing logbook that it caught only 300 kilograms during the same period.

Also intercepted by the Korean Coast Guard were two Chinese drift-net fishing boats that sneaked out of Korean waters after installing illegal fishing nets in the early morning and then coming back late at night to harvest their catch.

“Chinese fishing boats catch and use smaller and baby fish as feed on fish farms. If they continue to sweep up everything like now, fishes like croaker could completely disappear someday,” said Yoo Seung-ho, captain of a drift-net fishing boat.

According to the Jeju Regional Coast Guard, the number of Chinese fishing boats that were caught for illegal operations in Jeju waters during the past five years totaled 162, with the amount of collateral seized estimated at 12.9 billion won (US$10.8 million).

During the period from Jan. 1 to Nov. 22 this year, the number of Chinese fishing boats that were caught operating illegally stood at 19, with the amount of collateral seized estimated at 2.3 billion won.