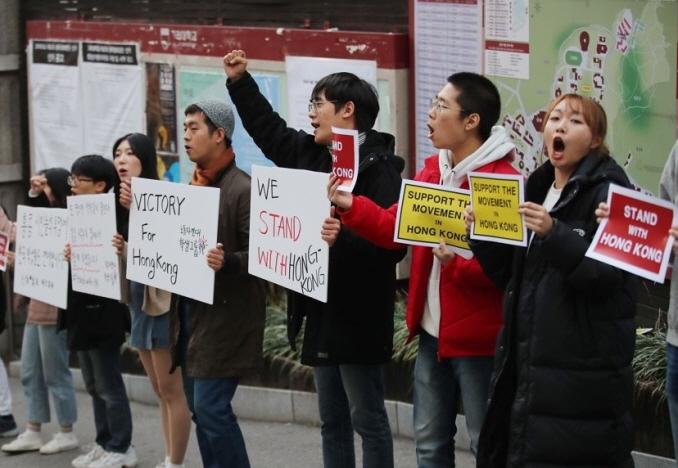 A group of Korea University students, belonging to the progressive Workers’ Solidarity civic group, chant a slogan supporting protests in Hong Kong during a rally at their campus in Seoul on Nov. 12, 2019. (Yonhap)

SEOUL, Nov. 21 (Korea Bizwire) — Amid a deepening divide between Korean and Chinese students at local universities over the issue of the democratization movement in Hong Kong, a number of Chinese students are being reported for offensive conduct.

One student at Hanyang University responsible for setting up the Lennon Wall and receiving messages from Hong Kong has reportedly been assaulted by Chinese students since November 13.

Chinese students who recognized the student after his picture was shared on Weibo, the Chinese equivalent of Twitter, have reportedly thrown coins at him.

“We pay more for school tuition, and we have more money. That’s why we are throwing in some coins for you, because we feel bad for you,” said the Chinese students, according to the student victim.

At a school event held in front of the Lennon Wall at Hanyang University, groups of Chinese students reportedly rushed in, pushing away Korean students protecting the wall as they threw coins.

On a school bulletin board at Hankuk University of Foreign Studies, a photo of a female student in charge of raising posters in support of the Hong Kong protests was posted with hurtful comments that said “I am mentally ill.”

Chinese students have for long been seen damaging banners and posters in support of the Hong Kong protests.

One student at Dongguk University had to go through a police investigation after he got in a fight with a Chinese student trying to take down a poster supporting the Hong Kong protests.

The Chinese student later reported the incident to the police, accusing him of assault. “The video footage showed that his actions did not amount to an assault,” the police said.

Experts argued that the actions committed by the Chinese students are “a form of terrorism” that requires “legal punishment.”

“Resorting to violence or denouncing one’s nationality amounts to an act of collective insult which is a legal violation,” said Prof. Seol Dong-hoon from Chonbuk National University.

“Their visas need to be revoked, and they should be deported.”

In the meantime, some have cautioned that these countermeasures should not encourage anti-Chinese sentiment.