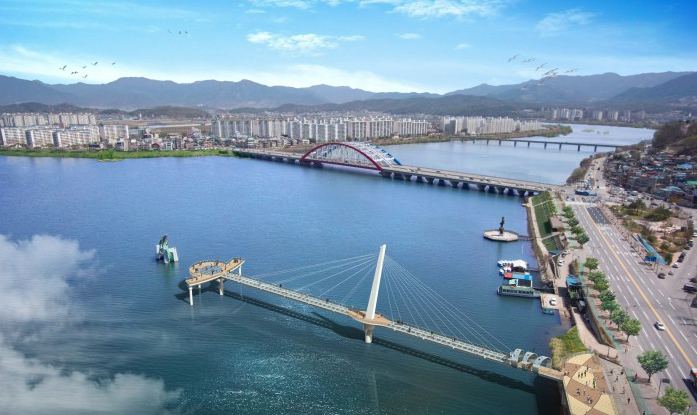 The Skywalk’s floor is made of transparent glass, and as it is only four centimeters thick, the appearance of fragility is enough to delight those who walk on it. (image: Chuncheon)

CHUNCHEON, South Korea, Oct. 19 (Korea Bizwire) – A walk on Chuncheon’s Soyang River Skywalk, a major tourism attraction featuring a transparent glass bridge, may not be as much of a thrill as some were hoping it might be, resulting in the scaling back of plans for the facility’s expansion.

The Skywalk is a glass bridge and deck that extends 156m into Chuncheon’s Uiamho Lake, offering visitors the experience of walking on water.

To expand the facility, Chuncheon submitted a supplementary budget request of 800 million KRW at a meeting held on Oct. 18, but some city councilors opposed the request because they weren’t “thrilled” by the attraction.

“Unfortunately, it turns out that the facility does not seem to offer much excitement to tourists. While it is important to build a deck, it is more important study the type of tourists who come to this attraction, and then build the necessary facilities based on the analysis,” said city councilor Byun Kwan-woo.

After a vote by 21 city councilors, the budget was cut in half, from 800 million to 400 million KRW. Chuncheon officials could not believe the outcome, refuting the assertion that the Skywalk doesn’t offer any thrills.

Officials backed up their claim with the fact that the number of visitors to the attraction did not decrease even after three months, which is typically when new attractions start to see a decline in visitors. According to official statistics, the number of accumulated visitors to the Skywalk was 430,909 in the three months since the facility opened on July 8. This means that an average of 130,000 people came to see the attraction, which cost about 7 billion won to build, every month.

The Skywalk’s floor is made of transparent glass, and as it is only four centimeters thick, the appearance of fragility is enough to delight those who walk on it. This is why Chuncheon is trying to expand the attraction by enlarging the entrance deck and building a fountain around the observatory in the middle of the pond.

“People who come here enjoy walking on the glass bridge, but also the feeling of being in the middle of Uiamho Lake. The Skywalk has become a landmark in Chuncheon really quickly, and flea markets and night markets are opening up around it,” said a city official.