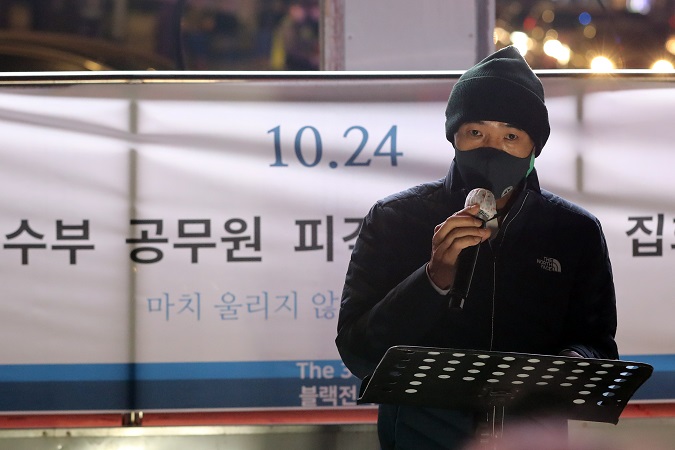 Lee Rae-jin, the elder brother of a South Korean fisheries official, shot to death by the North Korean military last month, speaks during a memorial rally in Seoul on Oct. 24, 2020. (Yonhap)

SEOUL, Oct. 24 (Korea Bizwire) — A civic group held a memorial rally in Seoul on Saturday for a South Korean fisheries official shot to death by the North Korean military last month, with his son vowing to “fight until the end” to regain his honor.

The group consisting of people in their 20s and 30s led the rally, as the family of the ill-fated official strongly protested the Coast Guard’s interim conclusion that he sought to defect to the North after losing money in gambling.

Lee Rae-jin, the elder brother of the official, joined the rally and revealed his nephew’s hand-written letter in which he expressed frustration over the Coast Guard’s claim that the official tried to voluntarily defect to the North.

“People easily make their judgment, although they don’t know how we have lived and under what environment we have been growing up. The only ones qualified to judge my father are my father himself and my mother who had been together with him for the last 20 years,” the son wrote.

“It might be painful, but I will fight until the end, until I can regain my father’s honor so that he can comfortably close his eyes,” he added.

The elder brother of the official renewed calls for North Korean leader Kim Jong-un to return the official’s remains and agree to initiate a joint probe into the killing incident.

“Until we can confidently reveal my brother’s name, our family will do our best,” he said.

Challenging the claim of his brother’s defection to the North, Lee has been appealing to the United Nations for a fresh investigation.