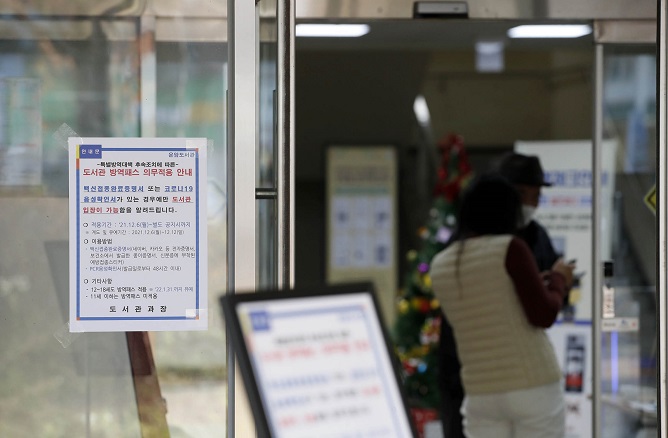 A vaccine pass notice is placed on the entrance of a public library in Gwangju, 330 kilometers south of Seoul, on Dec. 7, 2021. (Yonhap)

SEOUL, Dec. 8 (Korea Bizwire) — Civic groups opposing the government’s plan to expand the COVID-19 vaccine pass program to adolescents filed a petition with the state human rights commission on Wednesday, arguing that the scheme would violate the learning rights of students.

The decision to require teens aged 12 to 18 to present vaccine certificates at multiuse facilities, most notably public study rooms and cram schools, starting February has been met with wide opposition among parents, arguing the measure amounts to forcing vaccination upon minors.

The plan was announced last week along with toughened gathering restrictions amid the latest virus resurgence and a pileup of student infections.

Three Seoul-based civic groups, including a parents organization, announced they filed the joint petition with the National Human Rights Commission of Korea against the move, saying that the vaccine pass program for teens would essentially “violate students’ freedom to choose whether to be vaccinated or not.”

The groups asked the commission to “strongly recommend” top health and education authorities, including Jeong Eun-kyeong, head of the Korea Disease Control and Prevention Agency, to entirely reconsider the implementation.

They insisted the government was effectively coercing students to get vaccinations in order to visit cram schools or libraries and that parents who distrust the safety of vaccines cannot consent, saying that the issue at hand is directly connected to the lives of children.