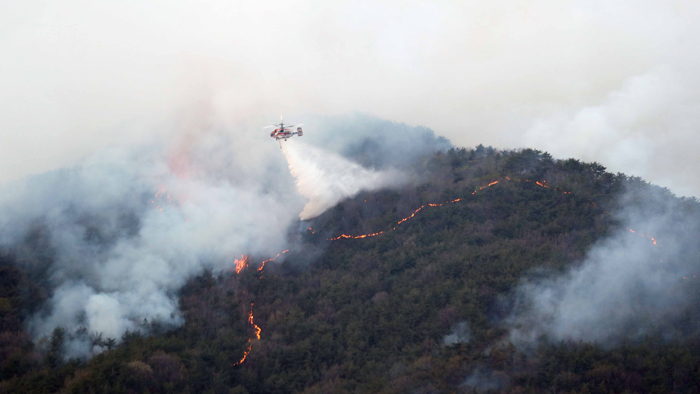 A rescue helicopter working to extinguish a fire, which broke out on a mountain near the popular Haeundae beach in the southern port city, on April 3, 2019. (Yonhap)

BUSAN, Apr. 3 (Korea Bizwire) — The massive wildfire that burned across a mountain in the southern port city of Busan was completely contained after destroying an extensive amount of forest, with no casualties reported, firefighters and police said Wednesday.

The Busan firefighting service said it put out the flames on Mount Unbong near the popular Haeundae beach, as of 9:10 a.m., 18 hours after the fire started. No casualties were reported.

The fire quickly spread as the southwesterly wind blowing at 3 meters per second sent embers to other areas and sparked more flames.

The blaze destroyed some 20 hectares of forest, equivalent to the size of 28 football stadiums, the authorities said.

Firefighters resumed their aerial operations early Wednesday to contain the fire, sending 18 rescue helicopters and so far about 3,340 rescue officials to the scene.

The fire appears to have spread further up to the mountain’s top overnight, the firefighters said.

“We’ve nearly completed containing the fire on the mountain’s foot and are trying to put out the flames before this afternoon,” a firefighting official said earlier.

About 200 people close to the area and over 180 households were evacuated.

Based on a witness statement, police said a small fire on farmland could have started the blaze. They soon plan to conduct a joint inspection with related authorities to figure out the exact cause.