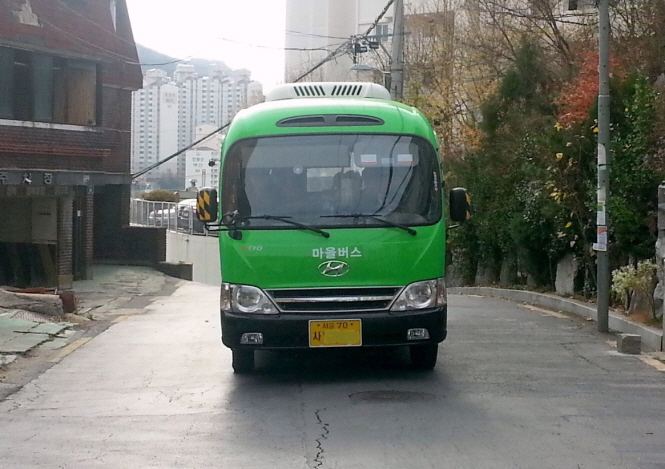 A village bus drives on a street in Seoul. (image: Seodaemun District Office)

“(We) have completed establishing the (free Wi-Fi) network on all maeul bus routes. We are in the process of establishing (the free Wi-Fi network) on intracity and metropolitan buses … and hope to complete it next year by expanding it to 1,399 more buses,” the Seoul Metropolitan Government said in a press release.

With the move, free Wi-Fi is now available on 1,499 village buses running on 235 routes across the capital, as well as around 81 percent of intracity and metropolitan buses.

Users can choose to access the Wi-Fi in public or secure modes.

The city government, meanwhile, said it also plans to provide free Wi-Fi at 358 key bus stops around the city.

The Seoul Metropolitan Government has been pushing to expand its free Wi-Fi network to various venues in the city by 2022.

Last month, the city government projected the scheme would increase free Wi-Fi coverage in key public and residential areas to 100 percent from the current 31 percent.

“By establishing (free Wi-Fi) in public venues that are relevant to the public’s everyday life, including city buses and maeul buses, we (hope to) expand the communications rights of the public without the financial burden of (mobile data) fees,” said Lee Won-mok, who heads the city’s smart city policy.

Seoul city first opened up its Wi-Fi network to the public in 2011 and has been increasing the number of wireless access points across the city.