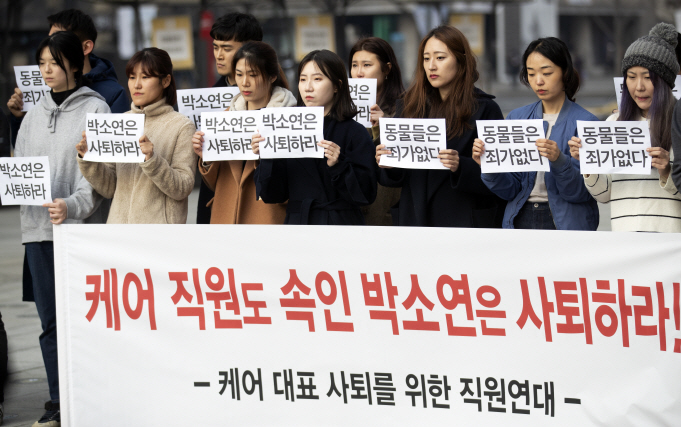 Employees at animal shelter Care stage a demonstration in central Gwanghwamun on Jan. 12, 2019, calling for the resignation of its head, Park So-yeon, after allegations emerged that she forced staff to put animals to sleep. (Yonhap)

SEOUL, Jan. 18 (Korea Bizwire) — A number of civic groups filed a complaint Friday asking for a police investigation into mounting suspicions that a high-profile animal rights activist has secretly been exterminating stray pets with drugs in her shelter and misusing donations.

They accuse Park So-yeon, chief executive of Care, of euthanizing more than 200 homeless animals and of secretly burying a number of them between 2015 and last year.

Park is also suspected of embezzling money from Care sponsors and keeping it for her personal use, buying, among other things, a plot of land.

The allegations came to light when a Care staff member recently came forward in a local media outlet with the revelation, claiming that Park had many of the animals put down, mostly without the consent from other staff.

Care has admitted to having administered the lethal drugs to the animals but only to those that were too sick or savage to keep in the shelter. Park has denied the allegations and plans to hold a press conference Saturday.

The controversy has stirred public anger, since Care had an image as an activist organization dedicated to protecting animal rights.

Its rescue work became highly publicized for ambushing dog farms and saving the dogs from being slaughtered or raised for fighting. The media has dubbed Park “the Queen of Rescues.”

A few other animal rights groups lodged a similar complaint against Park with the Seoul prosecution later in the day.