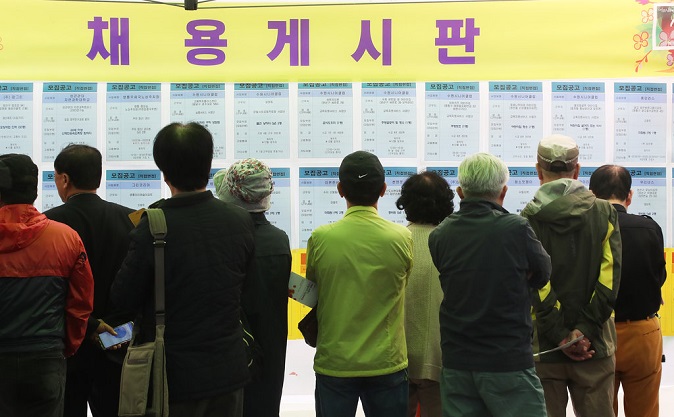 This file photo shows senior citizens reading job postings at a job fair for the elderly in Suwon, south of Seoul, on Oct. 15, 2019. (Yonhap)

SEOUL, Oct. 18 (Korea Bizwire) — While employment in the manufacturing industry is recovering, there were more recruits from the older generation than the younger generation, data showed Monday.

There were 4.53 million people employed in the manufacturing sector in August, up 240,000 from last year, according to Statistics Korea.

Sorted by age, the number of new recruits in their 60s or older jumped by 96,000, accounting for 39.9 percent of the entire rate of employment increase.

The number of new recruits in the manufacturing sector jumped by 176,000 in July, compared to last year, in which 58.1 percent were over 60 years of age.

While larger staff numbers indicated more new recruits overall, new recruits in their 60s or above were hired mostly by smaller businesses with five to nine employees.

New recruits in their 30s jumped the highest in businesses with 30 to 99 employees or those with more than 300 employees.

New recruits in their 20s jumped in number at businesses with 100 to 299 staff or those with more than 300 employees. Their numbers dropped among smaller businesses.