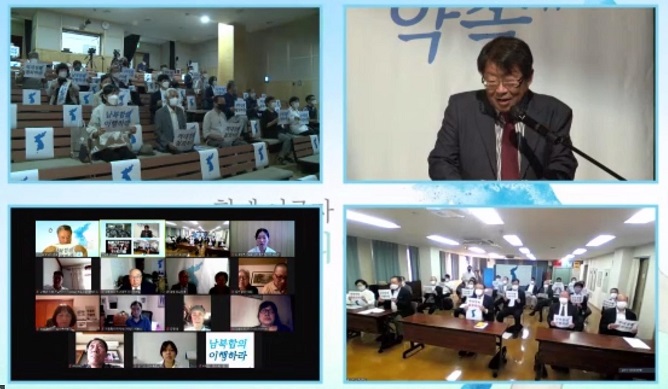 The South Korean Committee for Implementation of the June 15 Joint Declaration holds an event to mark the third anniversary of the Pyongyang declaration from an inter-Korean summit in 2019 in this photo provided by the committee.

SEOUL, Oct. 2 (Korea Bizwire) — A civic group advocating for national reunification called Saturday for the lifting of South Korea’s standalone sanctions against North Korea and the resumption of a now-shuttered joint industrial complex to pave the way for a thaw in cross-border ties.

The South Korean Committee for Implementation of the June 15 Joint Declaration made the call, as Seoul is struggling to resume dialogue with Pyongyang to advance its stalled peace agenda despite the regime’s recent missile tests.

The committee was formed following the historic June 15, 2000, inter-Korean summit, which produced a joint declaration toward achieving reconciliation, reunification and economic cooperation.

“If we carry out steps that we can take first, such as the lifting of May 24 sanctions and the resumption of the Kaesong Industrial Complex, the ground for dialogue will be able to reopen,” the committee said.

The committee was referring to the sanctions Seoul imposed in 2010 to ban inter-Korean exchanges in retaliation for the North’s torpedo attack on the corvette Cheonan, which killed 46 South Korean sailors.

The industrial complex, once seen as a rare symbol of cross-border cooperation, was closed in February 2016 following the North’s nuclear and missile tests.

Seoul’s efforts to lay the ground for enduring peace have been stalled amid a deadlock in nuclear negotiations between Washington and Pyongyang, which has continued since their no-deal summit in Hanoi in 2019.