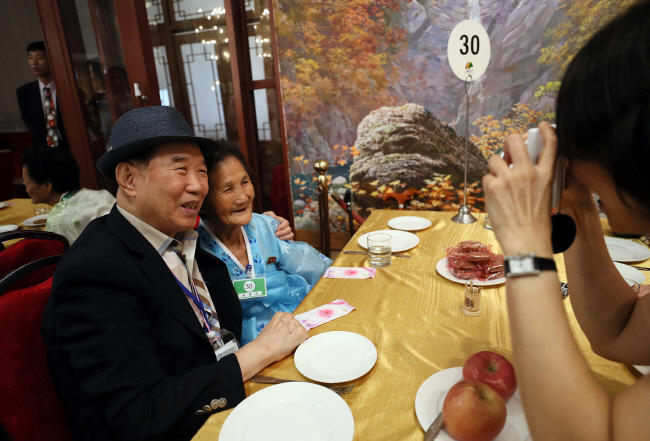 Min Byeong-hyeon from South Korea poses for a photo together with his sister Min Deok-yeo from North Korea at the end of the three-day family reunion event at a hotel at the Kumgang Mountain resort on the North’s scenic mountain near the east coast Aug. 22, 2018. (Yonhap)

SEOUL, Jan. 25 (Korea Bizwire) — For elderly South Koreans with long-separated relatives in North Korea, a freeze in inter-Korean relations means the government can’t set up family reunions for them and that they should look for other ways if they want to see their loved ones one last time before they die.

Hiring brokers is one option, though risky and costly.

Brokers are paid to track down relatives in North Korea and, if both sides agree to meet, guide them out of the country for secret meetings in a third country, usually China.

Helping separated families hire such brokers is one of the main jobs that the Inter-Korean Separated Families Association does.

“Our association helps separated families reunite by arranging face-to-face meetings, exchanging letters or tracking down their family in the North. We have a network of brokers that we have worked with for a long time,” Song Nak-hwan, head of the association, said in a recent interview with Yonhap News Agency.

Such unofficial reunions drew attention after the unification ministry said last month it will seek to raise the government’s financial support for such privately organized reunions and exchanges between families separated across the border since the Korean War broke out 70 years ago.

The three-year master plan to bolster unofficial exchanges between separated families underscored the urgency of the issue at a time when remaining separated family members grow older and older and thousands die year after year.

Last year alone, a total of 3,147 South Koreans registered with the government as separated family members died from January to November.

Buoyed by the conciliatory mood in 2018, the two Koreas held a round of family reunions in August of that year at the North’s Mount Kumgang resort for the first time in about three years, making it the 21st round of face-to-face reunions since the first inter-Korean summit in 2000.

But such official family reunions are unlikely to happen any time soon as the reconciliation process has grounded to a halt amid the prolonged impasse in denuclearization negotiations between the North and the United States.

Song, who has long been involved in the separated family issue, said his association acts as an intermediary between separated families and brokers, from tracking down a relative in the North to arranging face-to-face reunions.

Once North Korean relatives are successfully tracked down and agree to meet with their loved ones from the South, brokers guide them out of the country by usually crossing the Tumen River into China, where they reunite at a secret place near the border organized by the association, according to Song.

A Chinese broker sometimes hires another broker within North Korea to get around tight controls in the North.

Reunited families spend time together for a day or up to a week recollecting past events and sharing how their lives were like after they were separated, he said. 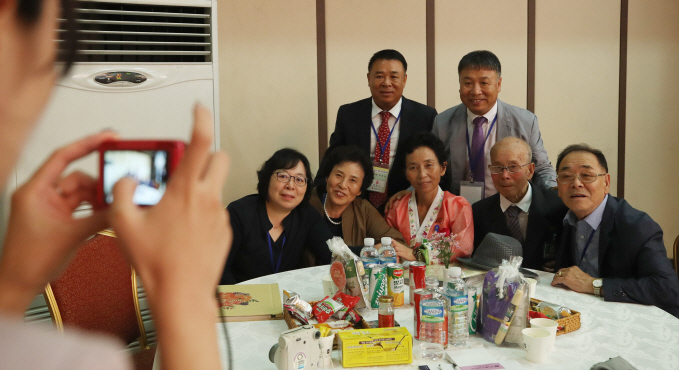 Members of a family separated by the 1950-53 Korean War pose for a photo at a hotel at North Korea’s Kumgang Mountain resort on the east coast as part of inter-Korean family reunions on Aug. 24, 2018. (image: Yonhap)

But organizing such reunions can be a costly and risky job.

Brokers usually demand around 10 million won (US$8,500) in return for traveling and bringing relatives out of the North, but they may demand more depending on how risky the journey is.

Tracking down family in Pyongyang, where a special permit is required, or when inter-Korean relations have turned sour can raise the broker fee.

“A bigger problem than all of them might be that oftentimes the reunion falls through. It rarely succeeds on the first try. We have witnessed on many occasions when the North Korean family never shows up,” Song said.

“It is really risky. You can die from it,” he said.

According to government data, a total of 1,757 such private reunions took place between 1990 and 2019, about 59 reunions per year.

But the number fell sharply in recent years, with only three cases reported to the government between 2017 and November last year, though an unidentified number of reunions went unreported in accordance with families’ wishes.

Song called for the South and the North to put aside any political considerations and approach the family reunion issue from a pure humanitarian perspective, stressing that time is running short for them.

“They have to see their loved ones before they die, but many of them are already in their 80s and 90s. It has become very urgent since they do not know when they will die. Every day counts for them,” he said.

South Korea has sought to regularize family reunions with North Korea to ease the grief of people hoping to see their loved ones before it is too late, but those efforts have frequently been stymied by ups and downs in inter-Korean relations.

The two Koreas have held more than 20 rounds of face-to-face family reunions in the past few decades, but each has reunited just around 100 families, which represent a very small fraction of some 130,000 people hoping to see their North Korean families again.

“Our goal this year is to reunite at least one family every month … it won’t be an easy job but we cannot turn a blind eye to the desperate wishes of those who are passing away every year,” Song said.

Song said that it is becoming increasingly difficult to realize face-to-face family reunions given the old age of applicants and long-distance travel that they have to go through. He, instead, prioritized efforts to let them know whether their families are still alive before it is too late.

“What is the most urgent is to verify whether their families (in the North) remain alive and (if they do) to help them exchange letters,” Song said. “At the very least, these things will wash away the deep sorrow and grief in their hearts.”

In the long term, Song said the association plans to start creating “an archive of photos, letters and records of all the work the association has done for future generations once we are all gone.”