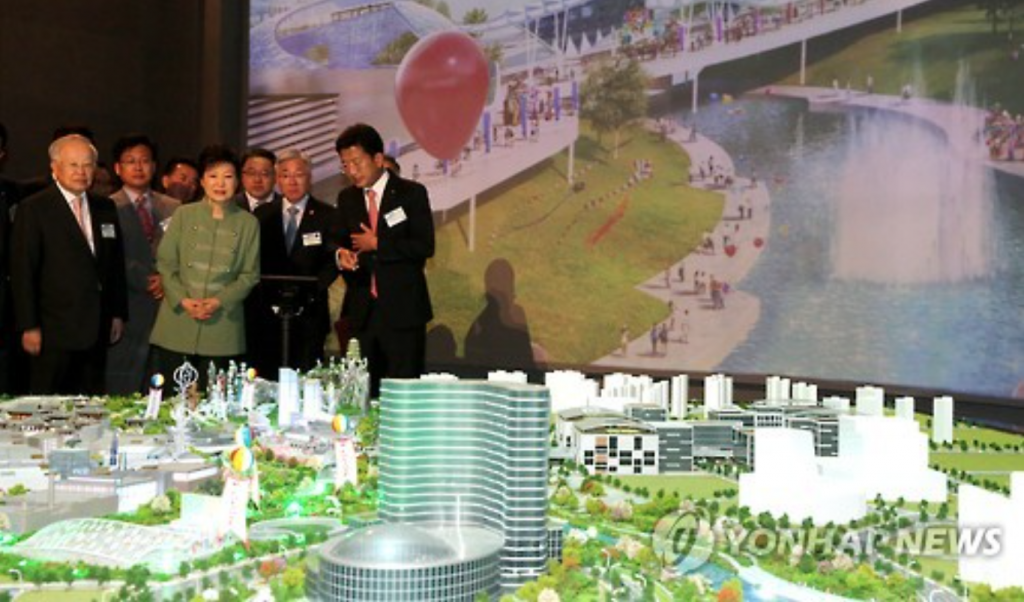 President Park Geun-hye (C, front row) is shown a model of K-Culture Valley during her visit to the site in Goyang, north of Seoul, on May 20, 2016. (image: Yonhap)

SEOUL, Nov. 21 (Korea Bizwire) – An ambitious culture project by CJ Group has been shaken from its roots from the unfolding political scandal, investment negotiations and decisions being suspended despite the conglomerate’s hard push, company officials and sources said Monday.

The entertainment business giant is building K-Culture Valley in Goyang, just north of Seoul, that would host shopping malls, hotels, theme parks and concert halls at a space of 300,000 square meters. The project costs 1.4 trillion won (US$1.19 billion) and is estimated to create production of 13 billion won over 10 years and jobs of more than 90,000. Construction of concert halls began in August, and works for other facilities were to begin early next year with completion scheduled for end of 2018.

Company officials said about 60 billion won has already gone into the project to buy the lot, get designs and for other preparatory work.

The project, however, hit a wall after Choi Soon-sil, a close confidante of President Park Geun-hye, and her associates were accused of controlling the country’s signature culture and sports businesses, including K-Culture Valley, for personal gains.

CJ Group has come under suspicions that it received special favors in exchange for hosting the project, being allowed a 50-year lease at a cost of just 1 percent of the price of the real estate after arranging investments from foreign partners. The local government of Gyeonggi Province, which administers Goyang City, is planning an on-site inspection of Bangsawan Brothers in Singapore later this week to look into such allegations.

A prosecution investigation on Choi and her associates have been suggesting that they tried to influence culture businesses by the CJ Group, pressuring the conglomerate to carry out the projects in a certain way with people that they favor.

Officials at CJ say K-Culture Valley was company-driven, and that the group chief Lee Jae-hyun is largely behind the management’s decision to stay on course.

“It wasn’t driven by government pressure or special favors. We had pursued it with determination as an expansion and connectivity to promoting our content,” a company official said. “At present, our position is that we go ahead with the project unchanged.”