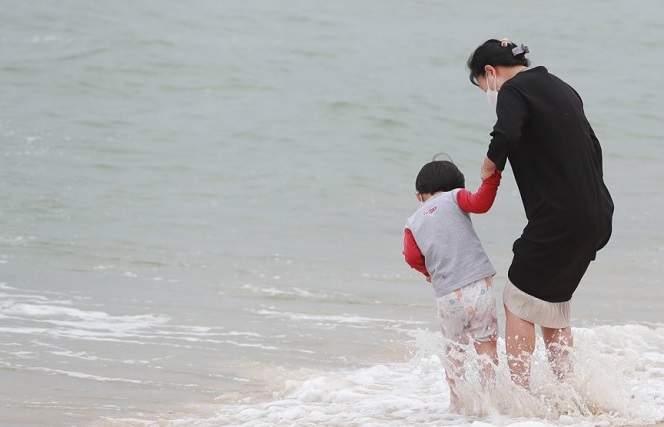 A mother and her boy play in the water at Haeundae Beach in the southeastern port city of Busan on April 22, 2021, amid early summer weather and an intraday high temperature of 23 C. (Yonhap)

SEOUL, May 2 (Korea Bizwire) — Human-caused climate change has brought about extensive meteorological changes on the Korean Peninsula over the past century, making summers longer and winters hotter and shorter and increasing the frequency of extreme weather events, such as heat waves and heavy downpours, a report said Sunday.

The KMA said it compiled the report on the basis of meteorological changes observed from six locations on the peninsula for 109 years from 1912 to 2020.

It said global warming and urbanization have progressed faster on the peninsula than the global average over the past century, as rises in its annual average temperature and carbon dioxide density were 0.8 C and 6.5 ppm higher compared to those of the entire earth.

Thus, the start dates of spring and summer also became faster by 17 days and 11 days, respectively. In the last 30 decades, summer has become the longest season with 118 days and autumn the shortest with 69 days.

The KMA report said the annual average temperature for the past 109 years has steadily increased by 0.2 C every 10 years, and temperature rises were particularly evident in spring and winter.

Temperature rises were bigger in cities and inland areas than in coastal regions, the report said, citing increases of 0.26 C in the southeastern city of Daegu over the past 10 years; 0.24 C in Seoul; 0.2 C in both Incheon, west of Seoul, and Gangneung on the east coast; 0.18 C in Busan; and 0.1 C in the southwestern port of Mokpo. 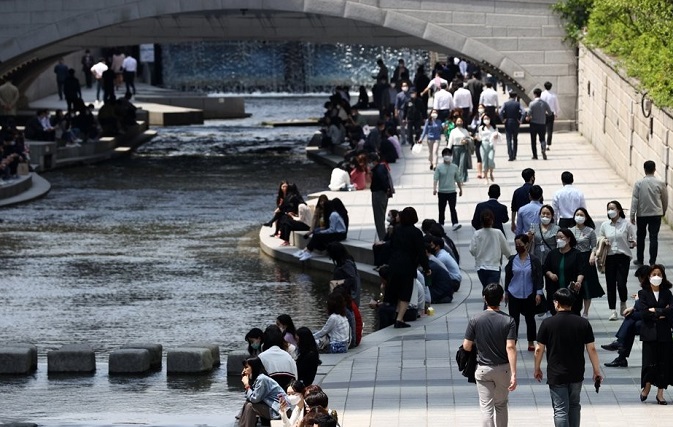 Citizens rest along the Cheonggye Stream in downtown Seoul on April 21, 2021, as the daily high recorded 26 C. (Yonhap)

Moreover, there have been noticeable increases in the frequency of extreme weather events, such as heat waves, tropical nights and heavy downpours.

Heat wave and tropical night days increased by one and 8.4 days, respectively, for the past 30 years compared with the 1912-1940 period.

The KMA said the acceleration of global warming will further increase the frequency of extreme climate phenomena that cause enormous damage.

The latest report that looks back on the history of the nation’s climate change has again illustrated the seriousness of climate crisis and will serve as a driving force to attain its greenhouse gas reduction target, it said.