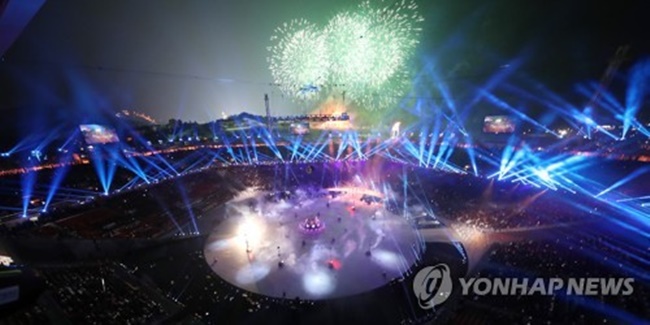 In this file photo, fireworks light up the sky above PyeongChang Olympic Stadium in PyeongChang during the opening ceremony of the Winter Olympics on Feb. 9, 2018. (Image: Yonhap)

PYEONGCHANG, South Korea, Feb. 22 (Korea Bizwire) – The closing ceremony of the PyeongChang Winter Olympics will be comprised of four big cultural shows highlighting the spirit of challenge and the future, organizers said Thursday.

Titled “The Next Wave,” Sunday’s closing ceremony of South Korea’s first Winter Games at PyeongChang Olympic Stadium will highlight the Olympic spirit of challenge and the vision of the future, along with a message of peace, the PyeongChang Olympic organizing committee said. The production will also explore themes of harmony and inclusion.

The show, which kicks off at 8 p.m., will mix traditional Korean imagery with modern aesthetics while also presenting the future vision of Korea through K-pop productions headlined by boy band EXO and hip-hop songstress CL.

Visionary Chinese filmmaker Zhang Yimou, who helmed the opening and closing ceremonies of the 2008 Beijing Summer Olympics, will showcase a handover show previewing spectacles expected at the 2022 Beijing Winter Olympics.

An aerial light show using Intel drones, which captivated television viewers around the world during the opening ceremony, will make a reappearance. Organizers, without providing a name, also said a world-renowned DJ will throw an EDM music show as the ceremony’s finale.

Organizers plan to provide raincoats, blankets and disposable hand warmers to spectators at the venue. Temperatures are expected to drop as low as minus 3 degrees Celsius, with wind chills as low as minus 9 C on Sunday.