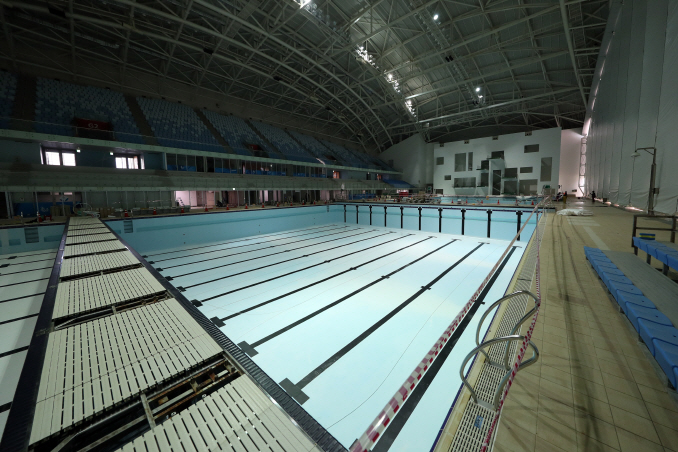 Nambu University Municipal Aquatics Center in Gwangju, 330 kilometers south of Seoul, which will serve as the swimming venue for the 2019 FINA World Aquatics Championships. (Yonhap)

SEOUL, May 22 (Korea Bizwire) — The southern metropolitan city of Gwangju is gearing up for the top international swimming competition this summer, ready to welcome the best athletes the world has to offer in water.

The countdown to the FINA World Aquatics Championships will reach 50 days on Thursday. Under the theme of “Dive into Peace,” the competition will run from July 12-28 in Gwangju, 330 kilometers south of Seoul, with the South Jeolla Province town of Yeosu hosting the open water swimming races.

This will be the 18th edition of the competition and the first to take place in South Korea. Gwangju is the third Asian host city, after Japan’s Fukuoka in 2001 and China’s Shanghai in 2011.

The local organizers said preparations are well on track, with only the final touches needed for the facilities.

Gwangju previously hosted the 2015 Summer Universiade and received high marks for running a cost-effective competition. For the world championships, the city plans to use the main pool constructed for the Universiade.

Spanking venues or not, it’s the athletes that drive these competitions and put fans in the seats. Unfortunately for local fans, Park Tae-hwan, an Olympic gold medalist and a two-time world champion, has already announced he will sit out the competition, citing his lack of preparation.

Even without the host country’s greatest swimmer, there should still be a great deal of star power.

Kim Seo-yeong represents the best medal hope for South Korea. She had a banner year in 2018, winning the gold medal in the women’s 200-meter individual medley (IM) and the silver in the 400m IM at the Asian Games. In the 200m IM, Kim’s winning time of 2:08.34 was both the South Korean national record and the Asian Games competition record.

In the world championships history, only three host countries — Colombia in 1975, Ecuador in 1982 and Spain in 1986 — have been shut out of medals. South Korea may join the dubious club. 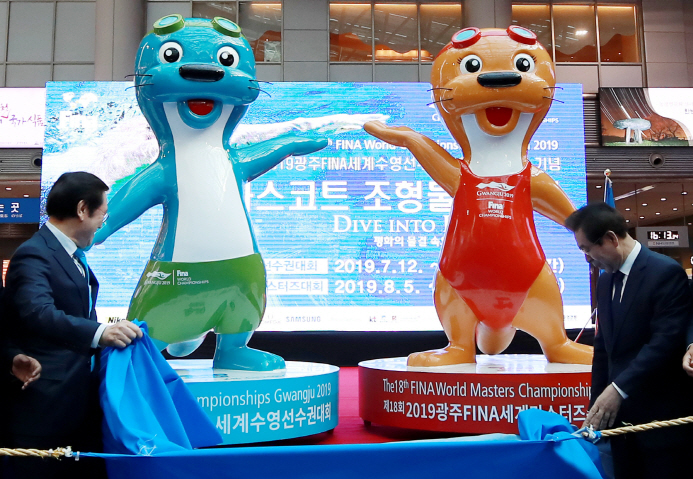 Suri (L) and Dari, male and female otters, respectively, being unveiled as the mascots for the 2019 FINA World Aquatics Championships to be held in Gwangju, 330 kilometers south of Seoul, during a ceremony at Yongsan Station in the capital city. (Yonhap)

But hosting the world championships should be more about the future than the present, said Sung Baik-you, spokesman of the event.

“This competition will open new horizons in swimming in the country,” Sung said. “We may not be a swimming power yet, but we’ll hopefully become one. After the world championships, we hope there will be more swimming pools built across the nation and more people will take up the sport. And maybe some of them will develop into elite swimmers.”

From 2013 to 2017, Ledecky won three gold medals — in 400m, 800m and 1,500m freestyle — in three consecutive world championships. She owns the world records in all three events and will try to sweep those three distances at an unprecedented fourth straight worlds.

Ledecky already holds the record for most world titles by a female swimmer with 14.

Another American, Caeleb Dressel, collected seven gold medals at the last world championships in 2017, tying Michael Phelps for most titles at a single competition. He will try to match that feat in Gwangju, and even the great Phelps never managed to win seven world titles in back-to-back competitions.

Sun Yang of China will be chasing his fourth consecutive title in the men’s 400m freestyle. The second of Park Tae-hwan’s two world titles came in the 400m free in 2011. Since then, Sun has reigned supreme in that event to become the second swimmer, after Ian Thorpe, to win three straight world titles in the 400m free.

Gwangju organizers have been pushing for North Korea’s participation in the competition, with a possible joint team in water polo. They’re still awaiting a response from Pyongyang, though inter-Korean talks on sports exchanges have stalled with tensions having recently resurfaced on the Korean Peninsula.

Having North Korean athletes compete in South Korean waters for the first time will have a novelty factor, but those who travel to Gwangju for the world championships will have plenty more to enjoy outside the arena.

Gwangju has prepared a series of cultural events and tour programs for visitors for July and is working on a special bus route for foreign tourists to check out the city, which is known as a fine culinary destination.

For the duration of the world championships, Gwangju will host traditional music concerts and dance festivals for athletes, officials and fans alike. The popular Daein Night Market will be up and running for the owls, while the Gwangju Fringe Festival, featuring art performances and exhibitions, will be in full swing.

“Gwangju offers great food, and there are a lot of tourist attractions in and around the city,” Sung, the spokesman, said. “It’s a great destination for a family trip, especially with schools on summer break in July.”