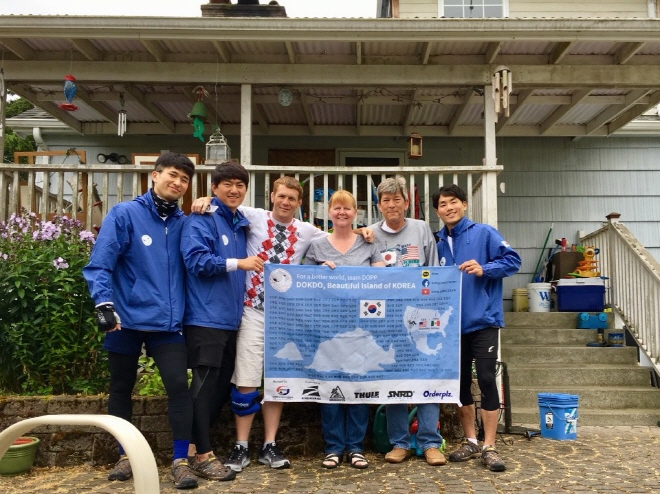 Gil decided to make the journey that lasted two months after hearing that Google’s map function had denotated the islets of Dokdo as “Liancourt Rocks,” which spurred him to travel to the United States to raise awareness that Dokdo belonged to South Korea.

Liancourt Rocks is another name for the Dokdo islets that is often communicated to third party countries by the Japanese government to prevent others from recognizing Korea’s sovereignty over the islets.

This version of the islets’ name derives from “Le Liancourt,” the name of a French ship that came close to being wrecked on one of Dokdo’s islets in 1849.

Gil, Lee and Ha graduated from the same high school. The cycling trio pedaled throughout the day without a single day of rest.

They met new people on their journey and presented them with cards and badges engraved with characters of the sea lion that lived on the shores of Dokdo. During their two-month journey, the three Korean university students met 154 people.

During their seventh week of cycling, they arrived in Los Angeles, where they participated in a National Liberation Day ceremony organized by the Korean Association which gave the young students a chance to raise even more awareness regarding the motivation behind their journey.

Gil said that Dokdo signifies the independence of South Korea which is why increased interest in the islets should not be a one-off event.

“I hope to carry out various activities to publicize Dokdo to an international audience in the future,” said Gil.