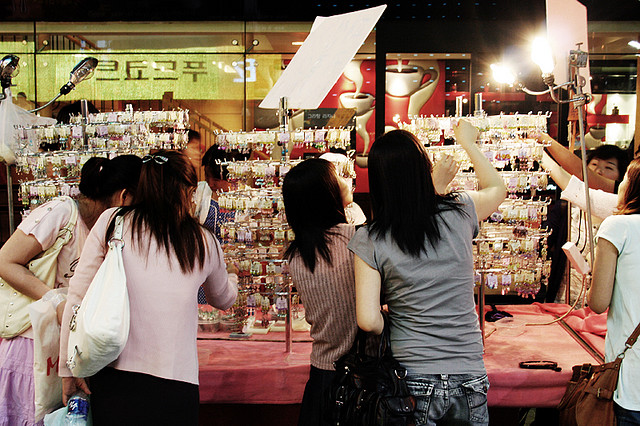 The turnaround was largely credited to the increased number of youkes, or Chinese travelers. (image: d’n'c/flickr)

SEOUL, Oct. 31 (Korea Bizwire) – Thanks to the increasing Chinese tourists to Korea, the tourism balance of payments turned to the black for the first time in 28 months in September. Besides, Korea earned a record income from tourism during the month surpassing the US$1.7 billion mark also for the first time.

According to the Bank of Korea and the Korea Culture and Tourism Institute, Korea’s tourism income increased $450 million over the same month last year to $1,765 million. With the soared income from inbound tourists, Korea recorded $78 million of surplus in the month, the first gain since May 2012. During the period, Koreans spent $1,687 million for their overseas travels.

The turnaround was largely credited to the increased number of youkes, or Chinese travelers. During the month, 564,078 Chinese tourists visited Korea, or 45.3 percent of the whole 1,245,777 foreign travelers to Korea. In the first nine months of this year, a total of 4.68 million Chinese people came to Korea, 2.7 times higher than the number of Japanese visitors (1.74 million).

Meanwhile, it is expected that the trend will continue in October as the growing number of Chinese travelers selected Korea for their destination amid the unstable political situation in Hong Kong and other Southeast Asian countries. Moreover, as the strong U.S. dollar suppresses Koreans to travel abroad, the tourism balance of payments is expected to keep in the black in October, too.

An official at the tourism institute said, “A significant number of Chinese people visited Korea during China’s National Day holidays from October 1 to 7. Various factors will contribute to the surplus in the tourism balance of Korea.”

According to the Korea Tourism Organization, approximately 164,000 Chinese travelers visited Korea during their state holiday season, 38 percent up over the last year’s season.