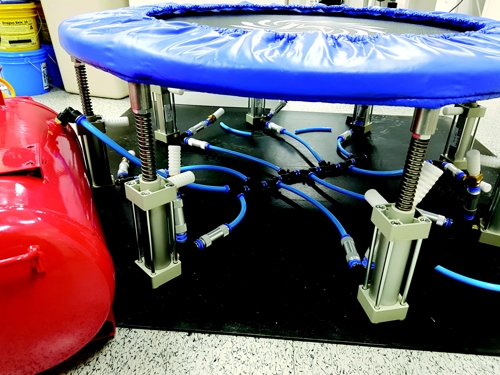 The team, led by Kim Jae-in, a student in the Mechanical Aviation Engineering Department of the school’s Engineering College, plans to provide the device to a delegation of volunteers from the university’s dental college that is scheduled to visit Tanzania next month to provide dental care.

Members of the engineering team have taken a course aimed at developing products that benefit developing countries and the impoverished at relatively reasonable costs, the school said.

The trampoline is designed to generate compressed air while having children bounce on it, and the air is stored in a tank with a valve, developed by them, to control atmospheric pressure.

According to the school, compressed air generated by the trampoline could have atmospheric pressure of 1 to 2 bars, or 14.5078 to 29.0076 pounds per square inch, which is applied in dental equipment.

Kim said the trampoline produces compressed air vital to the operation of dental equipment on its own so that treatment could be made available in a country like Tanzania where it is difficult to obtain compressed air for medical use.

“We hit upon a great idea of making the trampoline while thinking about a device that could make children have fun and help dental treatment there,” Kim said.

Kim will also join the volunteer group to watch the operation of the newly developed device in Tanzania.