SEOUL, May 23 (Korea Bizwire) — Colombia will participate in the 2022 Seoul International Book Fair (SIBF) next month as the guest of honor to commemorate the 60th anniversary of diplomatic ties between South Korea and the South American country, the event’s organizers said Monday.

This year’s SIBF, the country’s biggest annual book fair, will kick off on June 1 for a five-day run at the Convention and Exhibition Center in southern Seoul under the theme of “One Small Step.”

The Korean Publishers Association and the Colombian Embassy in South Korea said Colombia will present its culture and literature with the motto “Colombia: creative, diverse and fraternal” during the five-day event.

Around 30 Colombian writers will host discussion sessions, book exhibitions and cultural shows, while compilations of Colombian novels written by 10 young Colombian writers and poetry by 12 poets will be also presented at the book fair.

Nobel Prize-winning novelist Gabriel Garcia Marquez’s books, including “One Hundred Years of Solitude” (1967) and “Love in the Time of Cholera” (1985), will be displayed at the Colombian pavilion. 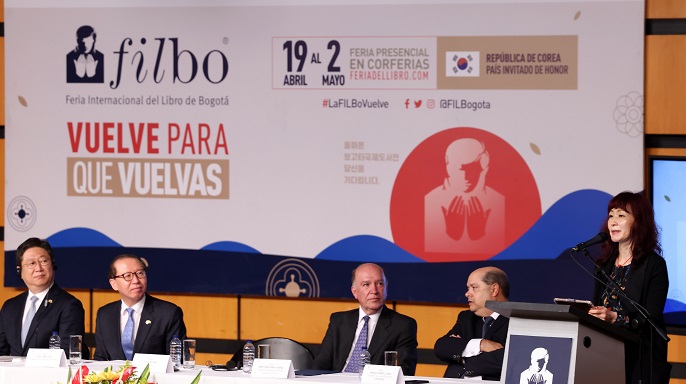 South Korean novelist Eun Hee-kyung (R) speaks during the opening ceremony of the 2022 Bogota International Book Fair that kicked off in Bogota, Colombia, on April 19, 2022, for a 14-day run, in this file photo provided by the Ministry of Culture, Sports and Tourism.

The participation of Colombia as a guest of honor in the SIBF 2022 came after an agreement made by leaders of the two nations at a summit meeting held last year.

Celebrating the 60th anniversary of bilateral diplomatic ties, the two countries decided to participate as honorary guests at book fairs to be hosted by each other’s country in order to promote bilateral exchanges and cooperation in the publishing field.