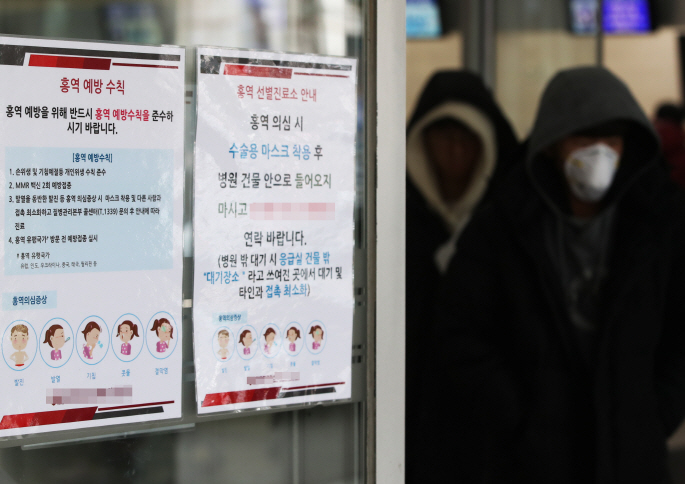 A poster at a hospital in Anyang, south of Seoul, informing people how to guard against measles. (Yonhap)

SEOUL, Apr. 10 (Korea Bizwire) — The number of measles cases confirmed in South Korea reached 129 this year amid outbreaks in other parts of the world, the public health agency said Wednesday.

The total tallied up till Monday comes as authorities considered the disease as having disappeared, with the annual number of non-foreign-related incidents falling below 20 after 2014.

The Korea Centers for Disease Control and Prevention (KCDC) said while purely local contractions have remained low for the most part, overall outbreaks have fluctuated with the influx of foreign visitors and South Koreans going to countries where measles are common.

Measles is a highly infectious airborne disease that causes fever, coughing and inflammation of the eyes, as well as rashes. The virus that causes the illness can bring about diarrhea and pneumonia, and, in severe instances, lead to seizures, and brain inflammation.

In 2010, KCDC data showed 111 cases reported in the port city of Incheon, west of Seoul, with 42 outbreaks in South Gyeongsang Province in the following year. In 2014, health officials checked 442 measles outbreaks, most of which were determined to have been foreign in origin.

“Outbreaks of the disease in certain European countries, like France, and many Southeast Asian countries have affected South Korea with people visiting the regions getting measles,” the KCDC said.

It, however, stressed that the situation in the country cannot be considered an epidemic, especially since most Koreans are inoculated.

The agency said that isolated instances of local outbreaks, which recently occurred in Anyang and Daegu, do occur, although the number of people affected is relatively small.

Both outbreaks, involving 16 and 22 people, respectively, and have already ended.

KCDC said that people in the medical profession, babies and toddlers, and those travelling to countries where large number of measles cases have been reported, should get vaccinated in advance so as not to inadvertently spread the disease.