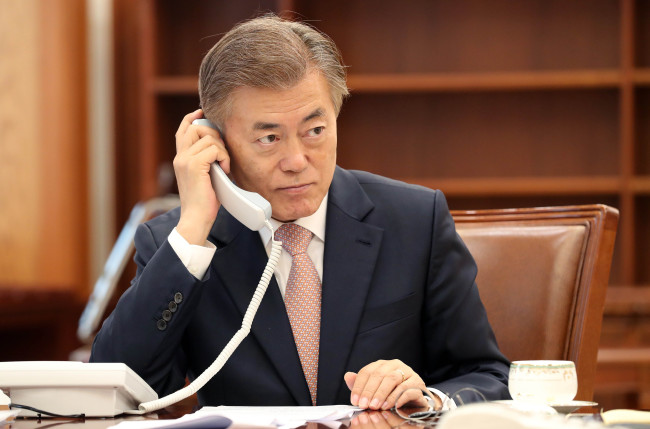 “Moon’s tone was very aggressive and resolute, especially for a first phone conversation between the two chiefs.” (image: Yonhap)

But to its east, South Korea faces another dispute, this time over comfort women, wartime sex slaves to the imperial Japanese military.

In his first phone call with Japanese Prime Minister Shinzo Abe on Thursday, President Moon challenged the 2015 agreement between the two East Asian countries, saying, “The reality is the majority of the South Korean people cannot accept the comfort women agreement.”

“We need to understand the reality and the sentiment of the people, and make efforts together (to solve the issue),” he added.

Under the deal announced on December 28, 2015, the Abe administration expressed remorse for the sexually violated victims during Japan’s colonial rule of the Korean Peninsula, and promised to provide 1 billion yen ($8.7 million) to establish a foundation to help the surviving victims.

The agreement also stated that the two countries should “refrain from criticizing each other over the matter in international communities including the UN,” and that the South Korean government do its best to “resolve” the conflict surrounding the comfort woman statue erected in front of the Japanese Embassy.

The deal quickly sparked controversy in South Korea, and was denounced by multiple civic groups including the majority of the surviving victims. Lee Yong-soo, a former comfort woman, said, “I completely disregard (the terms of the agreement),” days following the announcement.

Liberals took a similar stance, including Moon, who was the leader of the then-opposition Democratic Party of Korea.

“Our party opposes the agreement, and we declare its terms invalid, for they were not approved by the National Assembly,” he said two days after the deal was finalized, quoting a constitutional clause that states agreements or treaties sanctioning citizens’ rights require the assembly’s ratification.

Moon maintained his stance as he paved his way to the Blue House. In January 2017, in an interview with the Kyunghyang Shinmun, he again stressed the inevitability of renegotiating the arrangement, saying that the fundamental nature of resolving the issue is “not in money, but in Japan to admit to its legal liabilities and make an official apology (for its war crimes).” 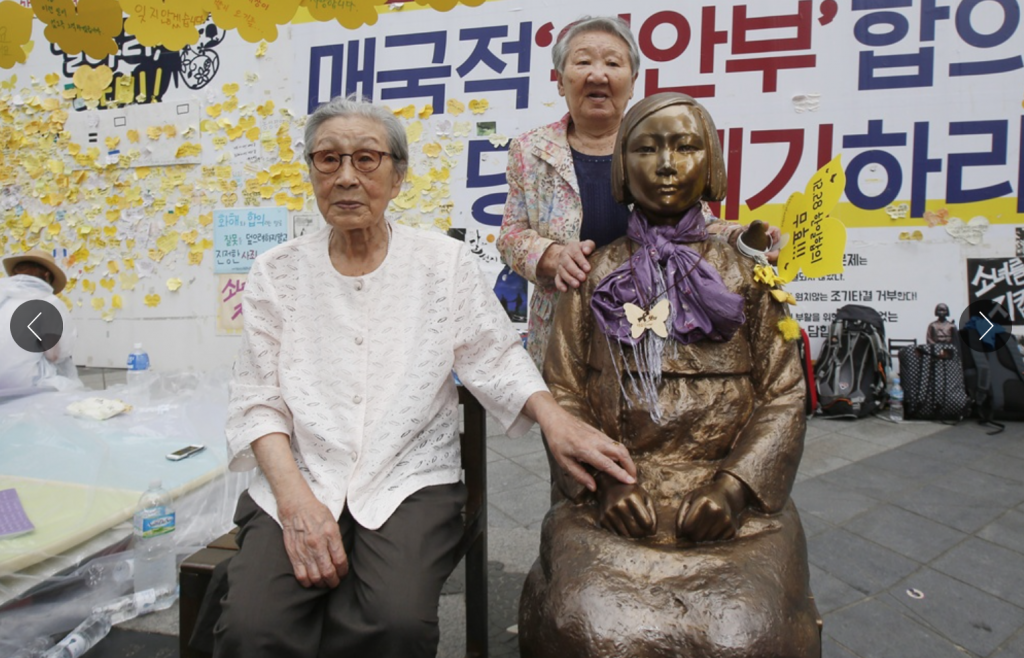 Former confort women Kim Bok-dong (L) and Gil Won-ok poses for a photo next to comfort woman statue in front of the Japanese Embassy in Seoul on August 14, 2016, the International Memorial Day for Comfort Women. (image: Yonhap)

As it happens, Japan has made several attempts since the agreement to distort its history with comfort women.

Less than a month after the deal, Prime Minister Abe said during a budget meeting that there was no evidence of forced mobilization of comfort women, adding that the government does not acknowledge the issue as a war crime.

In February, Deputy Foreign Minister Shinsuke Sugiyama reiterated Abe’s argument to the UN Committee on the Elimination of Discrimination against Women, and in March, the government revealed high school textbooks that used the word “recruited” instead of “took away” to describe the victims.

Public sentiment towards Japan grew worse in South Korea with the Abe administration’s persistent refusal to acknowledge the historical facts. By February 2017, 70 percent of the public said that the 2015 agreement should be renegotiated, according to a Gallup Korea study, from what was 58 percent in January 2016. Only 20 percent said that the deal should remain intact.

President Moon’s phone call with Abe indicates a clear deviation from the diplomatic strategy of his predecessor, experts say, which isn’t surprising considering that his disapproval of the agreement was included in his official election pledge. It is not yet clear, however, that the new commander-in-chief will push for a renegotiation or a complete nullification.

“Moon’s tone was very aggressive and resolute, especially for a first phone conversation between the two chiefs,” said Park Won-gon, a professor at Handong Global University. “Japan, which seeks to relocate the comfort woman statue, was probably taken aback (by the remarks).”

“But I feel that he might have shown his cards too hastily, too early into his administration,” he added.

“(The president) clearly pointed out that there has been criticism towards Japan’s lack of efforts, including its government’s indifferent approach and ludicrous statements by high-ranking officials. But at the same time, he implied that the two countries should continue to seek mutual interests surrounding the settlement.”