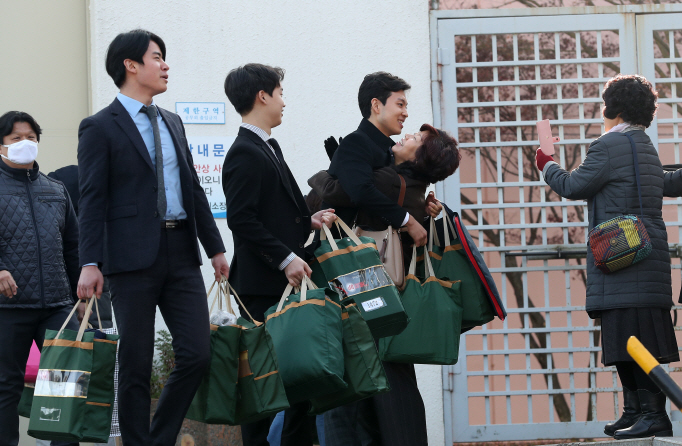 Conscientious objectors released on parole are greeted by their families at the Daegu Detention Center in Daegu, South Korea, on Nov. 30, 2018. (Yonhap)

SEOUL, Dec. 28 (Korea Bizwire) — South Korean men who refuse to join the military due to religious faith will be subject to three years of alternative duty at local correctional facilities, nearly double the length of service for Army draftees, the defense ministry announced Friday.

The ministry put on public notice the proposed revision to the Military Service Act and a new bill on introducing the program in 2020, capping months of heated debate that pitted rights advocates against critics, mostly conservatives.

In June, the Constitutional Court upheld the criminalization of conscientious objection but ordered the amendment of the conscription law by the end of next year to authorize their alternative service.

“The defense ministry has tried to craft a reasonable alternative form of service that harmonizes military service obligation and freedom of conscience,” Lee Nam-woo, chief of the ministry’s personnel welfare office, told a press briefing.

Lee added that the ministry’s decision was based on a set of principles: maintaining fairness vis-a-vis active-duty service members, preventing any exploitation of alternative service to avoid military conscription and respecting international norms in a way that does not compromise security readiness.

Under the new bill, a panel will be established under the defense ministry to deliberate on alternative service applications.

The defense minister is to officially appoint its 29 panel members — 10 named by the National Human Rights Commission (NHRC), 10 by the justice minister and nine by the defense minister. Its chairperson will be selected through a vote by the members.

Anyone who falsifies his application document or statement to enter alternative service will face jail terms between one and five years.

Successful applicants will serve in prisons, detention centers or other correctional facilities to undertake roles that do not involve the use of firearms or other weapons, the possible use of lethal force, or the destruction of any facilities.

The service term for faith-based objectors is 36 months, the same for other alternative service members, such as public health doctors. But the term can be adjusted by up to one year after a Cabinet deliberation and presidential approval.

The defense ministry hopes to submit the two bills to the National Assembly early next year after further consultations among related ministries and a review by the legislation ministry.

In recent months, the ministry struggled to reflect both demands from objectors and rights activists, and concerns about fairness and a possible spike in applications for alternative service. During the period, it held a series of public hearings, carried out public surveys and gave parliamentary and press briefings.

However, the NHRC expressed concerns, noting the proposed measures may lack reasonable grounds for setting details about alternative forms of military service.

“We voice deep concerns that the defense ministry’s measures do not fully reflect the intent of the Constitutional Court’s decision and international human rights standards,” Choi Young-ae, the watchdog’s chairperson, said in a statement.

She expressed hope that the National Assembly can thoroughly deliberate on the revision bills in a way that could correct potential problems in implementing the program.