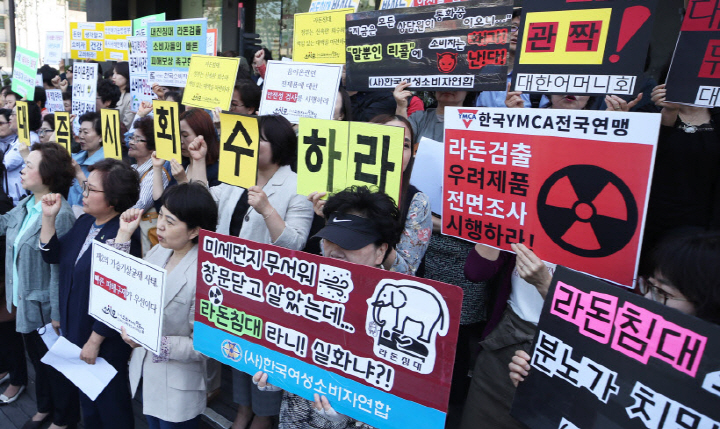 SEOUL, May 22 (Korea Bizwire) — Dozens of consumer activists on Monday pressed a local bed company to compensate consumers for selling beds that have been found to emit radiation levels that exceed safety limits.

The activists also called on the government to ensure that Daijin Bed Co. will compensate consumers over the matter, with many at the gathering in downtown Seoul holding pickets that read “Swift handling of radon bed compensation.”

The angry public reaction comes after South Korea’s Nuclear Safety and Security Commission announced last week that some of Daijin Bed’s mattresses emitted radon at levels up to 9.3 times the national standard.

Being exposed to radon — a colorless, odorless, radioactive gas — for a long period of time can lead to lung cancer, according to the American Cancer Society.

A bus driver who participated in rally in front of South Korea’s nuclear safety agency in central Seoul claimed that he had surgery to treat stomach cancer last year after having used a Daijin Bed mattress since 2010.

The 57-year-old — who identified himself only by his family name Chung — said his wife has been suffering from thyroid nodules and a rash.

“I have concerns that the bed may have caused health problems for me and my wife,” the driver said after attending the rally.

The couple called on Daijin Bed to quickly recall its product and provide compensation for the harm caused.

Daijin Bed has offered a public apology and said on its website that it has made it a top priority to recall its products.

Taeyul, a local law firm, has said it will file a suit against Daijin Bed on behalf of local consumers. Some 2,700 people have joined the suit so far, it said.

In response to growing calls for action, the Nuclear Safety and Security Commission said more than 2,000 affected mattresses will be recalled beginning Thursday, with hopes of completing that step within a month.

The commission said seven Daijin models, totaling some 60,000 mattresses, will be subject to recall. An independent collector selected by Daijin will pick up mattresses.

The commission added it will wrap up its testing of 16 additional models by Wednesday.