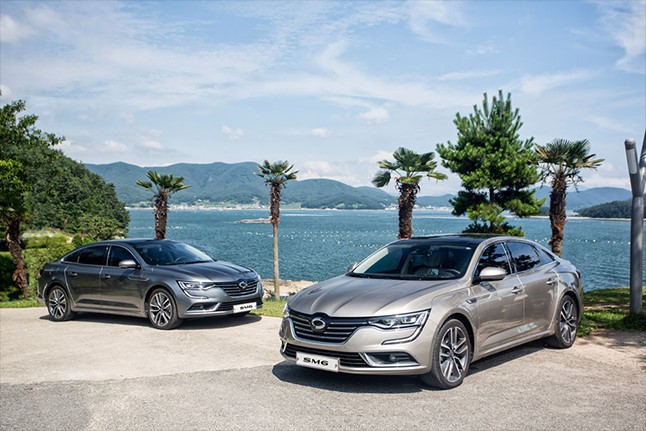 The SM6 has maintained a leading spot in the category for the past three months (taxis non-inclusive), and with this month’s launch of the diesel model, Renault Samsung expects a monthly sales record in August. (image: Renault Samsung Motors)

SEOUL, Aug. 22 (Korea Bizwire) – With lingering effects from Volkswagen emissions scandal still on the Korean automotive market, other automakers have gradually reaped benefits. But most recently, Renault Samsung Motors is enjoying the brisk sales of its latest SM6 models.

The Korean subsidiary of Groupe Renault said Sunday that August sales of its latest mid-sized diesel sedan, the SM6 dCi, already amounted to 541 units, contributing to the 27 percent increase in the SM6’s accumulated sales figure this month.

Marketed as the Renault Talisman outside of Korea, the SM6 was first introduced in March, and initially only as a gasoline model. Its diesel counterpart was launched on August 1, boasting a highly-competent fuel efficiency of 17km/L.

According to the company, the sales increase is the result of consumers seeking diesel alternatives with high fuel economy following the recent government decision to revoke certifications and ban the sale of 80 VW vehicle models in Korea. The Volkswagen Passat, also a mid-sized sedan, was among the SM6’s most prominent competitors when it launched in Korea.

“Car sales contracts tend to increase towards the end of each month, but thanks to the popularity of the SM6 dCi, we’ve had an unusual number of sales since the launch at the beginning of the month,” said a Renault Samsung official. “We believe that with Volkswagen’s recent troubles, some consumers switched over to the SM6.”

Renault Samsung officials expect that the number of SM6 sales contracts for August will “far exceed the figure for last month,” and help the SM6 further secure its leading position among Korea’s mid-sized sedans.

The SM6 has maintained a leading spot in the category for the past three months (taxis non-inclusive), and with this month’s launch of the diesel model, Renault Samsung expects a monthly sales record in August.