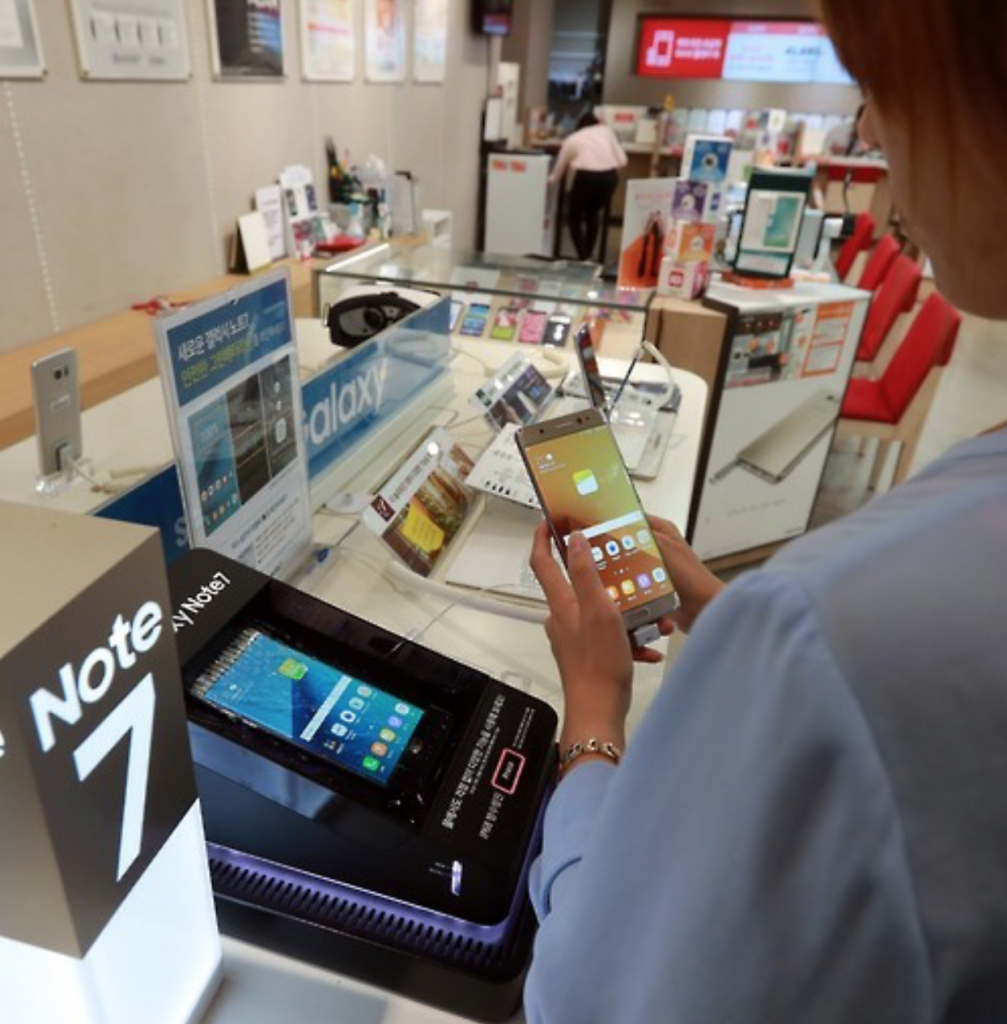 Samsung Electronics reassured its customers that no battery malfunctions have been found in over 1.2 million replaced models of the Galaxy Note 7. (image: Yonhap)

SEOUL, Oct. 7 (Korea Bizwire) – Owners of Samsung smartphones are still anxious despite the company’s quick recall measures as two additional phablets were found to have caught on fire.

One of the incidents took place in Korea on October 1 at a home in Seoul, the same day that Samsung resumed sales of its flagship phablet in the domestic market, and another on October 5 in Louisville, Kentucky, aboard a Southwest Airlines flight awaiting departure that forced passengers to evacuate.

Both of the damaged phones were claimed to have been replacement models of the Galaxy Note 7.

The domestic case was swiftly investigated by SGS Korea and the Korea Testing Laboratory (operating under the energy ministry), both of which concluded that the battery caught fire as a result of external force and pressure, finding the product to be without fault.

As for the incident in Louisville, however, the official investigation is expected to take longer, as the fire took place on an airplane, urging the Consumer Product Safety Commission and the Federal Aviation Administration to intervene once again.

According to Cho Jae-phil, a researcher in rechargeable batteries at UNIST, it is extremely rare for non-defective batteries to naturally catch fire when they’re 60 to 80 percent charged.

“I’m trying to be very careful here because I don’t know the details (of the Louisville incident), if the phone was in fact off as reported by the press, there’s certainly room for doubt as to a battery malfunction,” he said.

“On average, the rate of faulty batteries by a global manufacturer is one in 100 million. And if this incident was also from a defective battery, it would mean the rate falls somewhere around one in one million.”

Meanwhile, new speculation suggests that the incidents may be the result of defects with components other than the battery itself, such as a software malfunction or a failure of the phablet’s exterior structure to absorb outside force.

“There’s a very low chance of the battery catching fire with the power off,” said another expert on rechargeable batteries. “But if (the Louisville case) is also found to have resulted from external force, there’s definitely a need to investigate how much pressure would be required to actually lead to it catching fire.”

Amid the latest controversies, Samsung Electronics reassured its customers that no battery malfunctions have been found in over 1.2 million replaced models of the Galaxy Note 7, and it said the model of concern from Louisville can’t conclusively be identified as a replacement phone until the product is recovered for an investigation into the root cause of the problem.