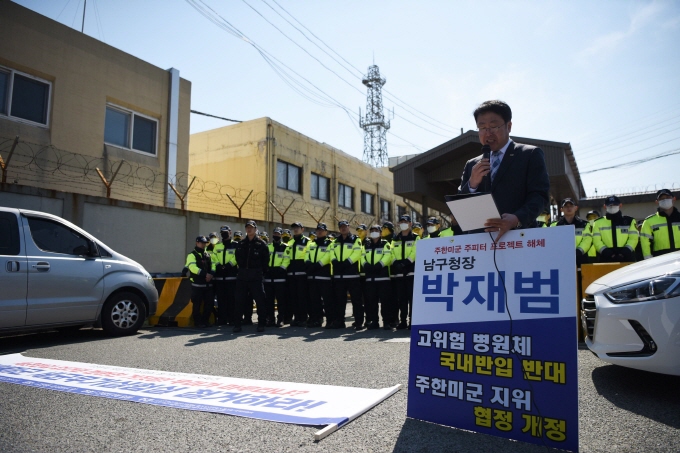 The Nam District Residents Committee staged a protest in front of the pier on Thursday, calling on the U.S. military “to shut down the Jupiter Program.” (image: Busan Nam District Office)

BUSAN, Mar. 15 (Korea Bizwire) — Rumors are spreading that U.S. Forces Korea (USFK) is conducting ‘biochemical experiments’ at Busan’s Pier 8, angering residents who are calling for more information to be revealed and the program to be shut down entirely.

The Nam District Residents Committee staged a protest in front of the pier on Thursday, calling on the U.S. military “to shut down the Jupiter Program.”

Some parts of the pier are allocated as a military facility managed by the logistics units from both ROK and U.S. forces.

The rumors concerning the biochemical test first broke out in 2015 when it was revealed that a living bacillus anthracis, an etiologic agent of anthrax, was delivered to the U.S. airbase in Osan, Gyeonggi Province.

The South Korean Ministry of Defense and USFK vowed “not to use any samples during the program.”

However, the U.S. Department of Defense Fiscal Year 2019 Budget Estimates showed that more than US$3.5 million was to be allocated to the Jupiter Program at Busan Port, stipulating that live agent tests were included in the program, reviving the controversy.

“Agents that cause anthrax or the plague can flow into our neighborhood,” said the committee. “The program should be abolished before it becomes a threat to the lives of 3.4 million people living in Busan.”

Busan’s Nam district also released a statement urging the U.S. military to disclose information and put a stop to the Jupiter Program. “Open up all facilities in Pier 8 and host a town hall meeting,” said the district.

“The Status of Forces Agreement (SOFA) should also be amended to prevent any dangerous agents from entering the country.”

City officials from Busan also plan to meet with officials at the Ministry of Defense and discuss plans to visit Pier 8.