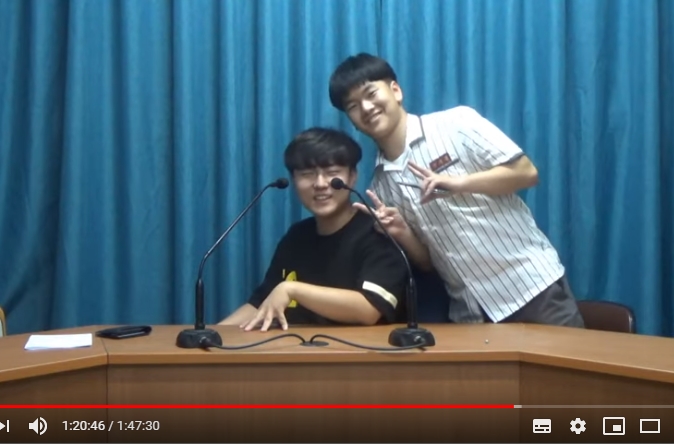 As of last Friday, this live streaming video of the end-of-semester ceremony on YouTube had been retweeted more than 8,500 times and reached more than 1,000 views.

This unique idea came from Lee Dong-kyun, a junior at Yeongdong High School and a member of the school’s broadcasting club, after the club’s instructor challenged the members to create a special memory before the semester ended.

Preparations were going well until club members found out that they didn’t have a YouTube channel to do a live broadcast.

While creating a channel is easy, live broadcasting requires registration and permission which can take several days to acquire.

That’s when Yang Ji-won, one of Lee’s close friends and a YouTuber since 2015, stepped in to share his account for the live broadcast.

“I’ve done a YouTube live before, but it was still exciting that the school would be using my account to conduct live streaming of the ceremony,” said Yang.

The school’s very first YouTube live end-of-semester ceremony was seen by hundreds of people including students, alumni, and their families.

The school even had to temporarily shut down the chatroom after comments surged, and almost 800 people watched the live broadcast.

“I want to create safe and enjoyable online content for everyone, not something like these provocative shows you commonly find on the internet,” said Lee.