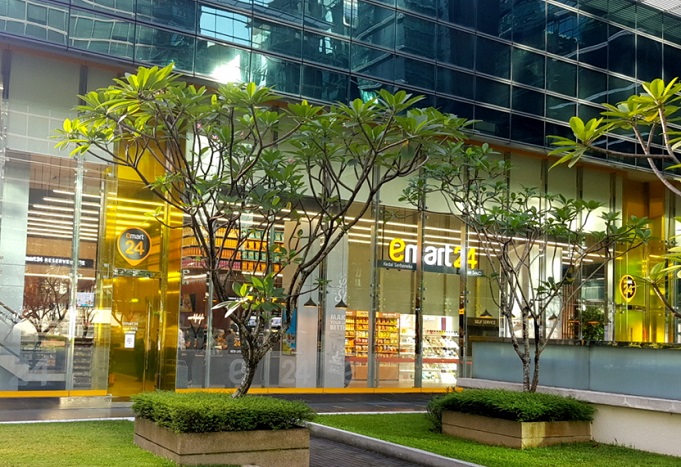 This photo, provided by E-Mart24 Inc. on June 23, 2021, shows its first Malaysian store that is to open in Kuala Lumpur the next day.

The 257-square-meter outlet, located in an office district in the Malaysian capital of Kuala Lumpur, is slated to open Thursday, E-Mart24 said.

E-Mart24 said it has signed a “master franchise” contract with local food and distribution investment firm United Frontiers Holdings (UFH) for its foray into the Southeast Asian country.

The store will carry four brands of instant cup rice and Korean street foods like “tteokbokki,” a popular Korean snack made from rice cakes and red chili pepper sauce, and “chicken gangjeong,” or sweet-and-sour fried chicken.

It will also sell such convenience foods as “gimbap,” or rice rolls with a variety of vegetables, as well as sandwiches and salads, to attract young Malaysian consumers, the company said.

E-Mart24′s private-label goods will account for 30 percent of all products, and the store will have a special shelf for South Korean cosmetics products to reflect high local interest in K-beauty, E-Mart24 added.

The company said UFH plans to open 10 stores by the end of 2021 and 300 stores within five years.

E-Mart24′s entry into Malaysia comes after its South Korean rival CU opened its first store in Kuala Lumpur in April this year.

South Korea’s convenience store chain operators have been setting their sights overseas as the local market has become increasingly saturated.