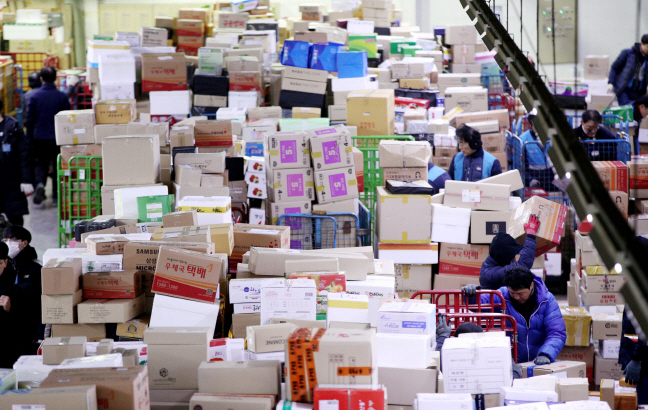 Postal workers process parcels for door-to-door delivery service at a logistics center of the Korea Post in Seoul. (Yonhap)

SEOUL, March 17 (Korea Bizwire) — Workers are struggling to make ends meet despite the “social distancing” campaign caused by the outbreak of the coronavirus.

In the process, many sad stories have been revealed.

An employee in his mid-40s who joined South Korean e-commerce giant Coupang only a month ago collapsed early Thursday during an early-morning delivery.

He already had heart arrest, when other colleagues, wondering why he had stopped making deliveries, found him. Paramedics performed CPR immediately, but were unable to resuscitate him.

The Korean Public Service and Transport Workers’ Union of the Korean Confederation of Trade Unions estimated that the Coupang worker died of overwork due to the surge in deliveries resulting from the coronavirus outbreak.

In fact, the worker reportedly complained that he was under pressure because he was afraid that his deliveries would be delayed.

Earlier in the day, a female worker in her 40s was identified as having “two jobs” in the course of determining who was impacted by a cluster infection at a call center building in Seoul.

A call center worker at a building in Seoul’s Guro District, where a massive cluster infection occurred, also delivered juice early in the morning in Yeouido’s financial district.

Meanwhile, even older workers could not avoid COVID-19.

Those in their 60s and 70s, who work for a waste disposal facility on the second basement floor of Lotte Department Store in Busan, were confirmed to have been infected with COVID-19.

Chang Duk-jin, a sociology professor at Seoul National University, pointed out that “under such circumstances, senior citizens, children, and those who are forced to work in a certain environment need to benefit from additional support, as their circumstances are different from ordinary citizens.”

Seol Dong-hoon, a sociology professor at Jeonbuk National University, also said, “There will be only a small number of people who really belong to the class who can practice proper social distancing”, adding that long-term measures, such as basic disaster income, should be employed for those whose job is directly related to their livelihood or survival.