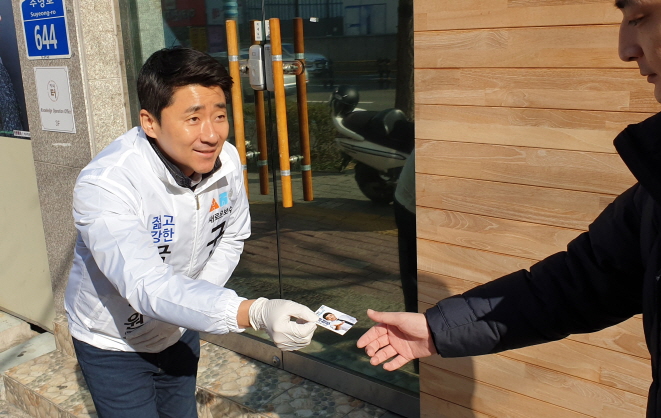 Many politicians are wearing gloves to minimize contact with local residents, while using pickets and other means to raise support. (Yonhap)

SEOUL, Feb. 10 (Korea Bizwire) — Politicians are on alert as the coronavirus outbreak is expected to continue as they prepare for the upcoming general elections on April 15.

Political campaigns are at risk at a critical time when candidates need to raise local support if they hope to dislodge incumbents.

The situation is particularly troublesome for newcomers in the political race as both ruling and non-ruling parties have agreed to refrain from gathering people for campaign rallies to avoid any risk of infection.

“Voters should get to know our faces, which becomes very difficult with masks on. We can’t take them off, though, because of the virus,” a local candidate said.

Many politicians are wearing masks and gloves to minimize contact with local residents, while using pickets and other means to raise support.

“Political newcomers like us are struggling with fewer opportunities to meet with supporters,” said Yun Gap-geun, former head of the Daegu District Prosecutor’s Office.

“We are considering sending out mail as part of our campaign strategy.”

An environment with fewer opportunities to meet with local voters is prompting many political newcomers to make their presence felt on YouTube, Facebook, and other social media.

Ha Seung-chang, the former Senior Presidential Secretary for Social Innovation running for office in Seoul’s Jung District, recently announced the opening of his campaign office through a YouTube channel run by a local culture critic.