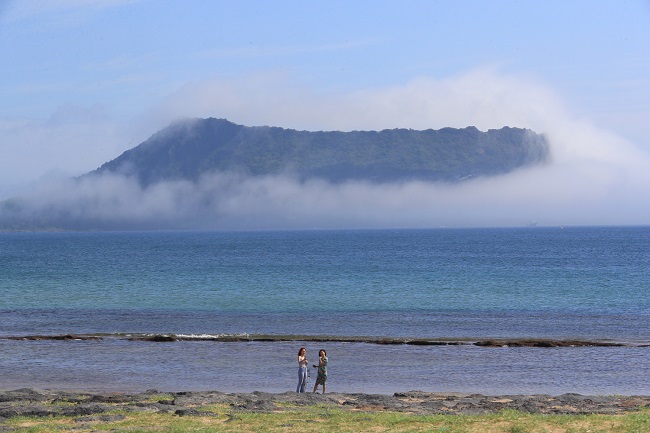 Tourists take pictures against the backdrop of a fog-covered Seongsan Ilchulbong (Sunrise Peak) on a beach on Jeju Island on July 23, 2019. (Yonhap)

JEJU, Dec. 8 (Korea Bizwire) — An increasing number of South Korean movie and drama makers are selecting Jeju Island as a shooting location rather than going overseas in the midst of the spread of the COVID-19 pandemic.

The number of location shootings on thet southern resort island stood at 133 this year, up 44 percent from 92 a year ago, according to the Jeju Contents Agency.

The agency explained that the number of location shootings on the island picked up sharply this year after growing steadily over the past several years since the outbreak of the COVID-19 pandemic has made it difficult for movie and TV productions to shoot overseas.

Among major projects that were shot on the island this year were tvN drama “Tale of the Nine Tailed,” as well as MBC dramas “The Spies Who Loved Me” and “Dinner Mate.”

For the TV shows and movies that are confirmed to be broadcast or released, the agency is subsidizing up to 30 percent of the expenses that production crews incur for location shootings on the island.

Through this project, the agency has already extended financial support of about 1 billion won (US$922,500) to a total of 11 movies and dramas over the past three years.