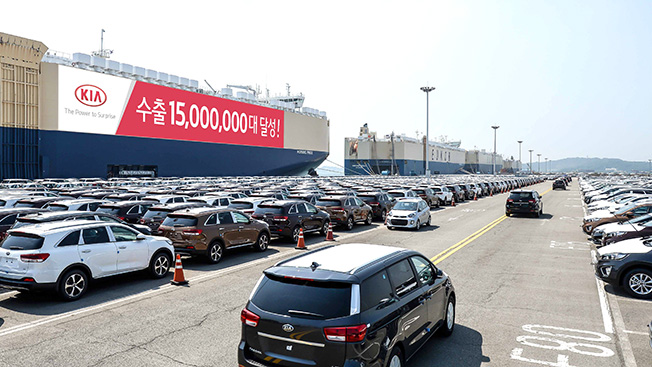 Kia Motors said in a press release that its cumulative exports stood at around 14.9 million units at the end of May and the figure is expected to surpass 15 million in the middle of this month. (image: Kia Motors)

Kia Motors said in a press release that its cumulative exports stood at around 14.9 million units at the end of May and the figure is expected to surpass 15 million in the middle of this month.

This comes after Kia Motors ventured overseas in 1975 with 10 units of the Brisa pickup truck shipped to Qatar.

Kia Motors, a smaller affiliate of Hyundai Motor, saw its exports outpace domestic sales for the first time in 1998 by selling some 250,000 cars in overseas markets. Since 2011, it has exported over 1 million cars annually.

Its cumulative exports surpassed the 5 million mark in 2005 and broke through 10 million in 2011.

Last year, Kia Motors ranked first among local automakers in terms of overseas sales by shipping out 1.24 million units, which are estimated at around $16.7 billion.

Its Pride subcompact has been the best-seller for Kia Motors with a total of 2.23 million units sold until May. The Sportage SUV and the Morning city car came next with 1.57 million and 1.43 million, respectively, the company said.

North America is the largest market for Kia Motors, which sold 6.03 million cars there over the past four decades.