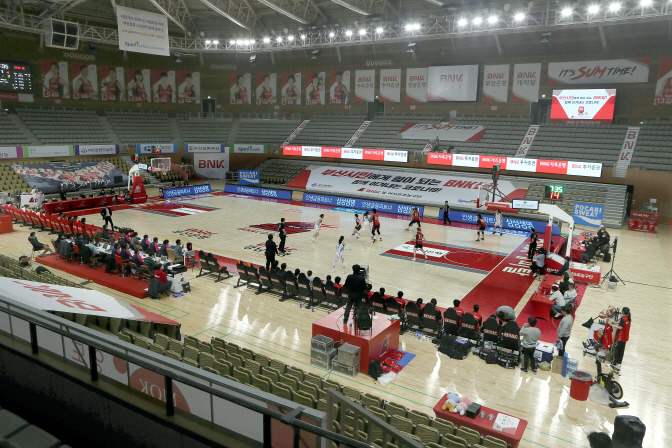 SEOUL, March 9 (Korea Bizwire) — The South Korean sports industry couldn’t dodge the impact from the coronavirus after it decided to delay matches in all four major sports leagues.

The Women’s Korean Basketball League (WKBL) assembled its board on Sunday and decided to shut down the league from March 10 to March 28.

“We didn’t want a situation where our players are placed under long-term quarantine because of the ensuing coronavirus,” the WKBL said.

The WKBL has played its games behind closed doors for about two weeks.

With the latest decision by the WKBL, all professional leagues in South Korea have come to a halt in the fallout from the spread of the novel COVID-19 virus.

In addition, South Korea’s national football team won’t be playing in March as the second preliminary round for the 2022 Qatar World Cup has been delayed.

Women’s football playoffs between South Korea and China for the 2020 Tokyo Olympics have been delayed to April, and a warm-up match for the U-23 men’s football team has been cancelled.

The World Team Table Tennis Championships, originally scheduled to run from March 22 to 29 in Busan, have been delayed to Jun. 21 to 28.

The Ulsan Hyundai FC was scheduled to compete with Australia’s Perth Glory for the Asian Football Confederation (AFC) Champions League on March 18, before the match was cancelled following the Australian government’s decision to restrict entry of all foreigners coming from South Korea.