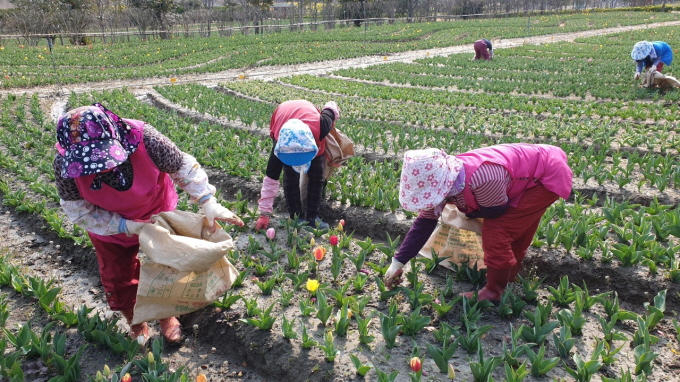 SEOUL, April 8 (Korea Bizwire) — A local county in South Korea removed 1 million tulip flowers from a field on Wednesday after its spring blossom festival was called off due to the coronavirus.

The southwestern county of Sinan became the latest in a series of municipalities that have canceled spring events, blocked tourist sites and even plowed up flowers en masse to keep crowds from gathering to view blossoms.

Last month, Sinan canceled its 12th annual tulip festival scheduled to be held on one of its islands in April.

As warm weather tempts people to visit and enjoy tulips, the county had local farmers pluck an estimated 1 million flowers in the seaside field on Wednesday.

The festival drew more than 50,000 people from across the country last year.

“We decided to remove tulip flowers to prevent the spread of COVID-19 and ease the anxiety of residents,” a county official said,

Dozens of blossom festivals have been canceled across the country since February, including the Yeouido Cherry Blossom Festival in southern Seoul.

Canola flowers have been plowed up on the southern island of Jeju and in the northeastern city of Samcheok.