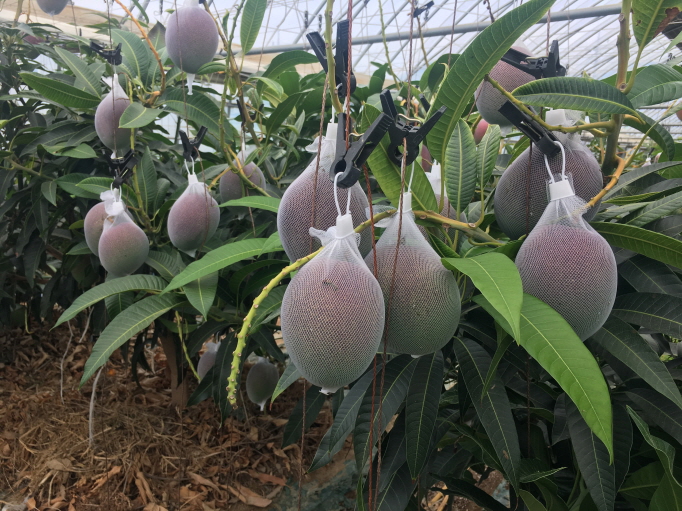 The county is using the waste heat from a nearby plant owned by Kumho Tire to heat up water that is then used to warm the greenhouses that the mangoes are grown in. (image: Gokseong County Office)

GOKSEONG, Jul. 5 (Korea Bizwire) — Gokseong County, a region in South Jeolla Province where temperatures are particularly frigid in the winter, is mesmerizing the public by growing apple mangoes, a subtropical fruit.

To grow them, the temperature needs to be maintained at more than 10 degrees Celsius at all times, which makes apple mangoes unsuitable for regions where low winter temperatures require higher heating costs.

Most of the apple mangoes in South Korea have been produced on Jeju Island. Recently, however, South Jeolla and South Gyeongsang Province are also picking up on growing the subtropical fruit.

In particular, Gokseong County, where average winter temperatures are 2 to 3 degrees lower than nearby areas, is surprising the public by growing apple mangoes.

The secret lies in the waste heat produced from factories and plants.

The county is using the waste heat from a nearby plant owned by Kumho Tire to heat up water that is then used to warm the greenhouses that the mangoes are grown in.

Waste heat emitted through chimneys during tire production is collected by a retrieval device and used to heat up the water for the farm’s heating system, which helps farmers save on heating costs.

Factories and plants are known to emit waste heat between 40 and 50 degrees Celsius.

Normally, heating costs rise as high as 10 million won (US$8,500) per 10 acres of land to maintain a temperature of more than 10°C. In Gokseong County, however, the farm only pays 3 million won for heating.

“We are currently testing various possibilities,” said a local official.