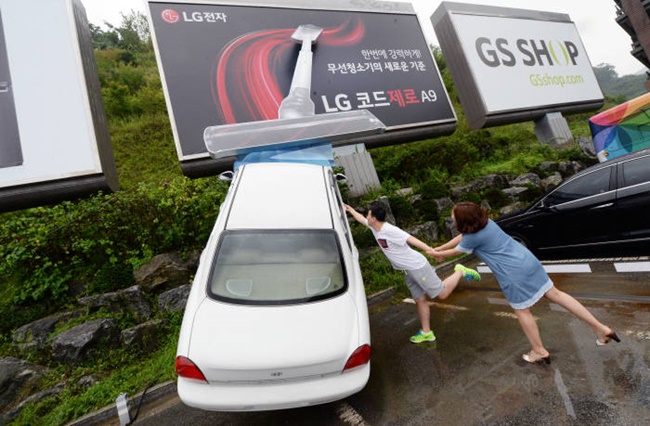 The two companies settled before heading to court in 2016 with Dyson promising not to pull the same stunt again. (Image: LG Electronics)

According to sources close to the case, the Seoul Central District Court on Tuesday struck down the British home appliance maker’s claim that LG exaggerated the performance of its cordless vacuum cleaner ‘LG CordZero A9’.

The court said LG’s ad was based on test results generated through objective means at reliable institutions and that no evidence was found that proved LG had intentionally made false or exaggerated claims.

Dyson filed an injunction against LG last November over what it claimed to be misleading advertisements for the company’s vacuum cleaner, calling for TV, print and online advertisements of LG’s CordZero A9 cleaners to be removed.

The British electronics maker took issue with the phrase a ‘smart inverter motor that rotates 16 times faster than that of a jet engine.’

LG hit back at the claim, saying the performance had been backed up by objective measures.

“The CordZero A9 commercial meets all legal requirements and we presented evidence that proves all of it was fact-based. We are competing honestly with our distinguished and competitive products,” an LG Electronics official said.

The current tiff between the two companies is nothing new, as they were previously embroiled in a legal battle in Australia over false advertising.

In 2015, LG took Dyson to court over claims of false advertising before the U.K. home appliance manufacturer acknowledged the criticism removed the ad in question, leading LG to drop the lawsuit.

The LG-Dyson spat continued the following year when Dyson compared its products to LG’s during a press conference, causing the South Korean electronics manufacturer to file another lawsuit at the Seoul Central District Court.

The two companies settled before heading to court in 2016 with Dyson promising not to pull the same stunt again.